Fixing to Get Interesting Around Here - Space Wise

Private space companies SpaceX and Blue Origins, both with large facilities within 40 miles of where I sit, are stepping up activities on the Space Coast, one of which will probably be tested before the end of the year.

NASA Spaceflight.com reports that Blue Origin, who has made a lot of progress in their design work but has not embraced launching as a business yet, has begun expansion of their facilities on the Cape Canaveral Air Force Station properties.  Blue Origin signed a long term lease for (former) launch complex 36, originally developed for the Atlas Centaur program in the '60s and is building several key pieces of infrastructure on the site.  The complex had its first launch on May 18, 1962, and was deactivated in 2005.

Blue Origin has started construction on their Horizontal Integration Facility (HIF) southwest of the launch pad. The HIF will be used to integrate and process New Glenn rockets before they are rolled out to the pad.  North of the pad, Blue is building a static test facility for testing their BE-4 engines (in its methane and BE-3U hydrogen burning versions) and appears to be being built to house two test stands.  Finally, the pad itself is already under construction in the center of all this.  The pad resembles the larger structures of LC39, where Apollo and STS (space shuttles) launched.  LC39 is now under long term lease to SpaceX. 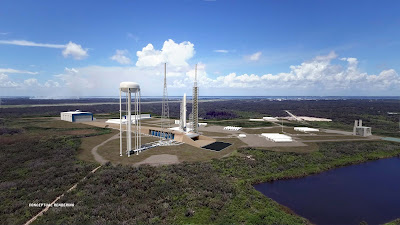 In this Blue Origin rendering, North is on the right and we're looking west; the Atlantic is close behind this viewpoint.  The HIF is the low slung building on the left, the static test stand on the right, and various tanks for propellant and oxygen add to the landscape.


New Glenn vehicles will be built inside Blue’s dedicated factory at Exploration Park, near Kennedy Space Center. The factory was completed in 2017 and was outfitted with machinery to assemble most of the major elements of New Glenn. These include the stage tanks, fairing halves, and payload adapters – but not the engines. Officials from Blue Origin have confirmed that parts of the first New Glenn are currently being built inside the factory.

Work has started on a New Glenn refurbishment facility next door to the factory at Exploration Park. Few details have been released, but it is known that the new building will be used to refurbish and test recovered New Glenn first stages. According to Blue, each first stage will be rated for at least 25 flights.

Blue origin is building more facilities elsewhere in the US.  Since the United Launch Alliance team chose the BE-4 engines for their Vulcan booster, the demand is up.  Early BE-4 engines are being built at Blue’s headquarters in Kent, Washington, and tested at Blue Origin’s West Texas facility.


In order to meet the coming demand for the BE-4, Blue has begun construction of a $200 million factory in Huntsville, Alabama. The company broke ground in January of this year and has progressed quickly with its construction.

All that said, the tentative date for Blue Origin launches from the refurbished LC-36 is two years out, in 2021.


Meanwhile, SpaceX appears nearing the first test flight of its Starship. The Starship and its Raptor engines have been tested for short duration start and stop tests several times.  In the most recent test, they lifted the test vehicle about 450 feet, translated laterally to a new landing position and then performed a controlled landing. We learn today that construction of the Starship is proceeding at the company's Boca Chica, Texas, facility.

The test vehicle, officially called the Starhopper (and nicknamed the Flying Water Tower), at 60' tall is a miniature version of Starship at 180' and pictured here (source), which will be the second stage of the monster booster SpaceX is planning called the BFR (Big Falcon Rocket).  The stacked BFR/Starship configuration will be taller than the Saturn V and is intended for moon and Mars missions. 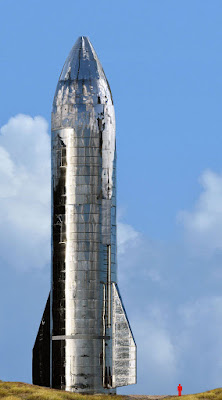 Interestingly, they appear to be building out this vehicle working 24/7:


SpaceX installed both of Starship Mk1’s aft wings/flaps over a 48 hour period, wrapping up the basic mechanical integration on September 22nd. Work has started on the prototype’s raceway and the frames of the first two wing hinge covers were spotted on Friday. As of midnight local time on September 23rd, SpaceX technicians were welding propellant feed lines to the outside of Starship’s tank section and installing the rocket’s header tanks – small secondary propellant tanks – inside its pointed nose section.

Elon Musk will be doing a presentation on Starship this coming Saturday, September 28th, although I can't find details on how it will be available.  Hopefully YouTube live rather than Twitter or Facebook streaming so I can watch it.  Recent reports (rumors?) are that SpaceX is planning a suborbital test of the Starship by itself within the month of October.  According to that Tech Crunch piece, they've filed requests with the FCC for a test to 74,000 feet altitude.  No, there doesn't appear to be a tentative date for the BFR to fly.

We've also heard the next test of the Crew Dragon Launch Abort System will be "any day now" with October to early November being cited often, so after a fairly long launch lull around here, things might be picking up.