The Fed Open Market Committee today announced lowering their benchmark overnight lending rate by 0.25% to a range of 1.75% to 2.00%, as was widely expected.  This officially marks the return of "easy money", with the Real Funds Rate going below the "Long Run Neutral" rate: 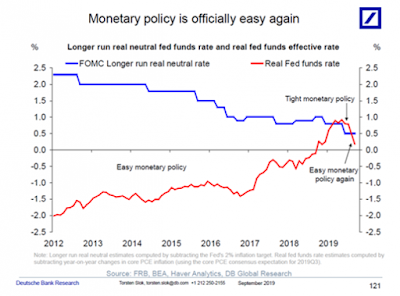 President Trump, who has been arguing the Fed's policies are unfair to him, was quick to attack.


President Trump has been vocal about his criticism about the way Federal Reserve Chairman Jerome Powell has doled out little-to-no interest rate cuts, and he was quick to complain again on Wednesday after the Fed announced a rate cut half of what markets were hoping for.

“No ‘guts,’ no sense, no vision,” Trump tweeted after the announcement.

This is the problem with a centrally managed economy, like the we get with the Federal Reserve Bank.  When the economic growth they measure slows down, they go to easy money, but when it's growing they need to crank some of that extra money they created back in and raise rates.  If rates are already effectively zero, there's no room to lower them if they need to.  The economy is in good shape now, so their tendency was to raise rates.

It is unfair to Trump that the Fed dumped trillions of dollars of economic stimulus into the economy from 2008 through 2016 helping Obama but now not helping Trump.  That unfairness isn't because of anything about Trump; it's what the Fed has to do to function properly.


“He’s worried that with Europe and Japan issues $16 trillion worth of negative interest rate bonds, our rates have to come down more to make our exports more competitive,” Asman said. “He’s got a point that the Fed has an important role in maintaining the dollar’s parity against foreign currencies.”

He has a point about negative interest rate bonds being issued widely around the world.  When bond buyers would rather lose money by buying a bond than stick the money in a vault, it means they consider losing money on the bond to be the best thing they can do with that that money.  For individuals, the choice is to buy a bond or some instrument that guarantees you will lose money or put your cash in your safe, your mattress, or in a waterproofed pipe in your back yard.  Which is the least risky option?  None of the above, buy silver coins?

We live in exceptionally unusual financial times, historically speaking.  The world seems on the precipice of something.