Chinese Dissidents Side with Trump in the "Trade War"

Free Pressers presents the story of Chinese dissidents, both inside and outside of the country, tend to support President Trump standing up to the communist government in China.  The article focuses on the views of Chinese dissident Chen Guangcheng.  Chen is currently a member of the faculty of the Institute for Policy Research and Catholic Studies at the Catholic University of America in Washington, D.C., and a distinguished senior fellow in human rights at the Witherspoon Institute.  He was imprisoned in 2006 after organizing a campaign against the forced abortions carried out under China’s one-child policy.


On April 22, 2012, Chen, a blind legal activist, escaped from house arrest in his home village of Dongshigu in eastern China’s Shandong province. Activist friends got him to Beijing and he eventually found his way into the U.S. embassy. Most of his escape was accomplished on a broken leg.

“As the world watches President Trump wage a protracted trade war with China, many people are scratching their heads, wondering if he knows what he’s doing when it comes to my home country,” Chen wrote.

“Trump is regularly criticized for being unpredictable and erratic — praising Chinese President Xi Jinping one moment, then escalating the confrontation the next — for ignoring diplomatic conventions, and for upending a tense but supposedly workable economic relationship.

“But as someone who has spent years with the knife edge of the Chinese Communist Party bearing down on my throat for my human rights work, I know that the president is on to something.”

In August, Chen Guangcheng wrote in August 30th op-ed for the Washington Post:


“Most activists agree that civilized talks behind closed doors have never elicited concessions from the CCP. The only way to make progress is by landing pointed blows, particularly against the party elites and their bank accounts (which are reliant on party-owned, nepotistic, monopolist companies).”
...
“Presidents before Trump naively believed that China would abide by international standards of behavior if it were granted access to institutions like the World Trade Organization and generally treated as a ‘normal’ country. But that path proved mistaken, and Beijing ignored Western pressure on matters from human rights to the widespread theft of intellectual property. Trump, whatever his flaws, grasps this reality,” Chen wrote.

“Unlike many of his predecessors in the White House, Trump appears to understand innately the hooliganism and brutality at the heart of the CCP. He comprehends that — whether in the realm of trade, diplomacy or international order — dictatorships do not commonly play by the rules of democratic nations. While past administrations have curried favor with the CCP (“appeasement” is not too strong a word), Trump has made excising the party’s growing corrosion of U.S. society — from business and the media to education and politics — a focus.”

It's an interesting article with perspectives I haven't seen elsewhere and my tendency is to think people from the inside have a much more detailed and nuanced view about situations than reporters, even subject matter experts.  Having suffered at the hands of the CCP, Chen is able to see details economic reporters won't see.

I haven't said much on the so-called trade war with China, and while I prefer and believe in free and fair trade, we are light years from that and can't get there from here.  It's simply not possible to play that game unless both sides are committed to being fair.  In the game of international trade and tariffs, the US has been a patsy.  An American car going to China pays 25% import duty, but a car from China coming to the US only pays 2.5%!  One tenth of the duty for the Chinese exporter.  Is that fair and free trade?  Add to that this tweet from Elon Musk, who also points out,


Also, no US auto company is allowed to own even 50% of their own factory in China, but there are five 100% China-owned EV auto companies in the US.

One of the things that got Trump elected is that voters who have been called every insult imaginable for as long as they can recall saw that he was a fighter.  Back in early 2016, John Robb at Global Guerillas wrote a piece about this and focused on Trump doing old-fashioned, New York construction worker-style ball-busting.


"From the start, Trump targeted the (mostly) white working class, which happens to be 40 percent of the country. And he’s done it not just with issues, but with how he talks — the ball-busting, the “bragging,” the over-the-top promises...

But it speaks volumes — whole encyclopedias — about the ignorance of our political and media elites that they’re only now realizing that much of what Trump’s been doing is just busting balls.  It’s a blue-collar ritual, with clear rules — overtly insulting, sure, but with infinite subtleties. It can be a test of manliness, a sign of respect, a way of bonding and much more.

It seems the Chinese dissidents think that busting balls isn't just a ritual of unionized construction workers from the Bronx or Brooklyn; it's a requirement for dealing with the Chinese Communist Party.  They needed someone with a pair of bricks to slam together on the CCP's collective balls and Trump is the guy. 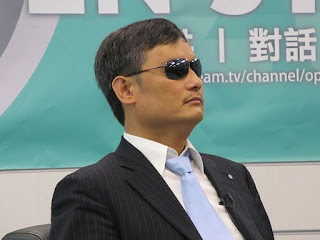