It's hard to take the climate craziness from the 700 hour CNN climate scold-a-thon seriously.  It was a continuous series of one member of the clown posse after the next trying to prove they were the most serious about it and the most radical.

Then I ran into the story about the Swedish "scientist" who says we need to overcome the taboos about cannibalism and eat the freshly dead to combat climate change.


At a summit for food of the future (the climate-ravaged future) called Gastro Summit, in Stockholm Sept 3-4, a professor held a powerpoint presentation asserting that we must “awaken the idea” of eating human flesh in the future, as a way of combatting the effects of climate change.

In a talk titled “Can you Imagine Eating Human Flesh?” behavioral scientist and marketing strategist Magnus Söderlund from “Handelshögskolan” (College of Commerce) argues for the breaking down of the ancient taboos against desecrating the human corpse and eating human flesh.

At least Booty Judge, Kneepads Harris, Fauxcahontas, and the rest of the clowns just want to ban plastic straws, hamburgers, cars, cattle farming, air travel, the internal combustion engine, petroleum use and pretty much all of the rest of modern society.  It's just like Agenda 21, as really envisioned; they want policies that will kill off 95% of humanity.  We've talked about this before, but it has been several years.  Aside from Magnus Söderlund they haven't talked about wiping out 5000 years of human history.


“Is Cannibalism the solution to food sustainability in the future? Does Generation Z have the answers to our food challenges? Can consumers be tricked into making the right decisions?At GastroSummit you will get some answers to these questions—and also partake in the latest scientific findings and get to meet the leading experts.”

Söderlund seemed incapable of separating the nearly universal prohibitions against eating human flesh from what he called conservatism, despite only about 8% of the audience at his Gastro Summit talks saying they would taste human flesh. I'd expect more than 8% yes answers if rejecting the idea is a conservative principle.


When asked if he himself would try it, he replies: “I feel somewhat hesitant but to not appear overly conservative… I’d have to say… I’d be open to at least tasting it.”

The logo for the talk, titled: “Food Of The Future: Worms, Grasshoppers, or Human Flesh,” features a splash of blood as part of the graphic design.

I'm not sure what to make of this story, like whether the guy is just a nutjob, if he's punking the world to get into the worldwide news cycle, or what.  There's (again) millennia of human experience saying cannibalism is a bad thing to do.  (I can see the public service announcements: “Cannibalism - it's not just a taboo, it's bad for you!”)  The author at Epoch Times, Celia Farber, brings up New Guinea cannibals called the Fore who lived in isolation until the 1930s.


[The Fore] believed in eating their dead rather than allowing them to be consumed by worms. This led to an epidemic of a disease called “kuru, or “the laughing death,” caused by ingestion of human meat. This disease was not caused by a pathogen, but rather, a “twisted protein,” (according to an NPR report) that tricks “other proteins in the brain to twist like it, damaging the brain’s cerebellum. Researchers compared it to Dr. Jekyll’s transformation. The last victim of kuru died in 2009.

When a 16 year old, autistic child (that Greta Thunberg kid) carries on about nonsense like climate change causing the end of all food and the end of the world, I think it's not worth trying to straighten out her misconceptions.  There's a reason we don't let 16 year olds enter into legal contracts and make other important decisions; they're not sophisticated enough.  In her case, her brain isn't sophisticated enough to understand the data-driven arguments against the climate change catastrophism.  When it's an adult, and Ph.D. like this Dr. Söderlund, that's different.  He's probably capable of understanding, he's just deliberately deciding to let someone else think for him.  Stated another way, deciding to remain ignorant.  In the case of the clown car, they're just interested in how much control and power over the world they can have.  They're each trying to be more extreme than the others so they can get all the money and power.  And then kill off the rest of us. 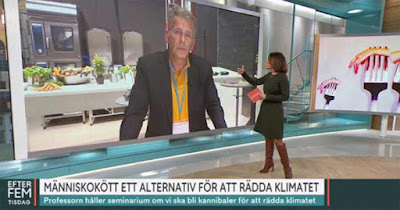