Last Friday, India's Vikram lunar lander was on approach to landing near the moon's south pole when contact was lost with the probe near the end of its descent.  India's Space Research Organization (ISRO) reports contact was lost when the probe was 2.1 km (1.3 mi) above its lunar landing site, and they have been attempting to contact the probe since then.  That aside, the mission has been successful: India has successfully placed a world-class, high-performance spacecraft - the Chandrayaan-2 orbiter - into a safe lunar orbit.  The orbiter is unaffected by this and will likely be returning high quality data to Earth for a long life.  It's expected to live seven years.

So far, only the US, Russian, and Chinese space agencies have landed satellites on the moon.


ISRO lost communication with Vikram just 2.1 km above the surface of the Moon. The lander was traveling a bit less than 80 m/s (180 mph), a speed that can be contextualized as ~95% of the way to landing relative to the lunar orbital velocity it started at. 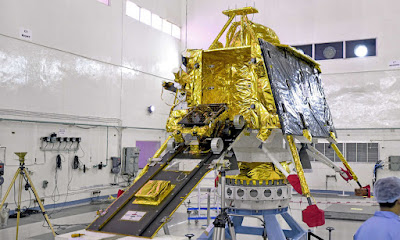 Vikram lander with the Pragyan rover visible on a ramp.  ISRO photo from Ars Technica.


Fascinatingly, rumor has it that the Vikram lander - despite lack of communication and a thoroughly anomalous landing attempt - is actually intact on the surface of the Moon, instilling hope that the lander may still be partially salvageable. According to those unofficial reports, Vikram somehow came to land on the lunar surface with no (or very few) parts visibly missing.


It's a foregone conclusion that if the lander is upside down or even on its side, the planned deployment of its small lunar rover isn't going to happen.  The rover, named Pragyan, ("Wisdom" in Sanskrit) is small and was not expected to survive the lunar night due to not having enough battery capacity to run heaters over the potentially two week long night.  The 27-kg (60 pound), six-wheeled rover was expected to roam up to 500 meters across the Moon.

ISRO has been trying to contact and hear back from the lander since Friday using the big dishes of NASA's Deep Space Network, never receiving anything from the probe.  This argues that it's very likely to be dead.

All of the indented quotes are from today's Teslarati email newsletter DeepSpace.  I've tried to find something on the Teslarati website that I can link to, but the newsletter doesn't show up.