To be honest, I missed this story back in July.  Strangely, I've gone to a couple of space-related websites (Space.com and Spaceflight Now, IIRC) looking for details on the failure investigation, but didn't find anything until bouncing around like a ping pong ball last night landed me on the website Teslarati.  Teslarati seems to be an "all things related to Elon Musk" site, possibly by, for and about fanboys.  I had to sign up for the site to read it, but it was worth giving my email address up for this.

Teslarati sums up a July conference call about the explosion this way.


Hosted by SpaceX Vice President of Mission Assurance Hans Koenigsmann and NASA Commercial Crew Program manager Kathy Lueders, the call provided some minor additional insight beyond a fairly extensive press release issued just prior. According to the preliminary results from SpaceX’s failure investigation, Crew Dragon’s explosion was unrelated to the spacecraft’s propellant tanks, Draco maneuvering thrusters, or SuperDraco abort engines. Rather, the cause lies in a more exotic and unanticipated chemical/material interaction between a plumbing valve, liquid oxidizer, and a helium-based pressurization system.

The problem caused Nitrogen Tetroxide, a very potent oxidizer, to ignite a titanium valve, leading to the explosion that destroyed the crew dragon capsule and part of the ground support hardware. 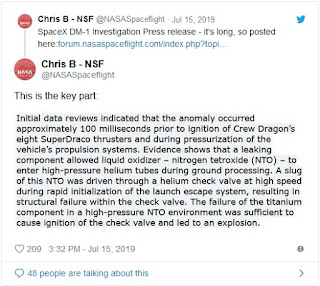 
The ultimate (likely) cause of Crew Dragon’s extremely energetic and destructive explosion centers around the spacecraft’s extensive SuperDraco/Draco plumbing and its associated pressurization system, which uses helium to keep the pressure-fed engines, propellant tanks, and feed lines around 2400 psi (16.5 megapascals). Necessarily, this method of pressurization means that there is direct contact between the pressurant (helium) and the oxidizer/fuel, thus requiring some sort of valve preventing the pressurized fluid from flowing into the pressurization system.

During flight-proven Crew Dragon capsule C201’s April 20th static fire testing, that is reportedly exactly what happened. Over the course of ground testing, a “check valve” separating the pressurization system and oxidizer leaked what SpaceX described as a “slug” of nitrogen tetroxide oxidizer (NTO) into the helium pressurization lines. Around T-100 milliseconds to a planned ignition of the vehicle’s 8 SuperDraco abort engines, the pressurization system rapidly “initialized” (i.e. quickly pressurized the oxidizer and fuel to operational pressures, ~2400 psi).

To do this, helium is rapidly pushed through a check valve – designed with low-molecular-mass helium in mind – to physically pressurize the propellant systems. Unintentionally, the NTO that leaked ‘upstream’ through that valve effectively was taken along for the ride with the high-pressure burst of helium. In essence, picture that you crash your car, only to discover that your nice, fluffy airbag has accidentally been replaced with a bag of sand, and you might be able to visualize the unintended forces Dragon’s check valve (the metaphorical airbag) was subjected to when a “slug” of dense oxidizer was rammed into it at high speed.

The article mentions that the investigation had gone through 80% of their fault tree, which raises the possibility this is not the final word.  Another contributor may be found and the final report may be more nuanced, but it's hard to see how this titanium fire isn't a very large part of the reason for the explosion even if not the only reason. 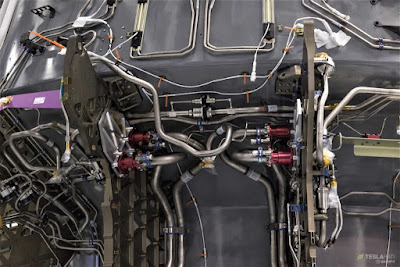 A view of the titanium plumbing for the Draco and Super Draco thrusters.  This is the capsule that will now fly SpaceX’s In-Flight Abort test.

As I understand it, titanium fires are much like magnesium fires in that once they're started they don't go out on their own.  Oxidizer has to be removed by covering the titanium with sand or something that completely blocks out the oxidizer, not an option in this situation.


In itself, this sort of failure mode is not hugely surprising and SpaceX may have even been aware of some sort of check valve leak(s) and accepted what it believed to be a minor risk in order to continue the test and perhaps examine Dragon’s performance under suboptimal conditions. What SpaceX says it did not realize was just how energetic the reaction between the NTO and the check valve could be. SpaceX’s understanding is that the high-speed slug of dense NTO was traveling so fast and at such a high pressure that, by impacting the titanium check valve, it quite literally broke the valve and may have chemically ignited the metal, thus introducing a slug of burning NTO into the liberated NTO system itself – effectively a match tossed into a powder keg.

Given this scenario, even if not 100% finalized, SpaceX has a workaround for the crew dragon.  A quick and relatively easy redesign.


Either way, the solution – as SpaceX perceives it – is the same: instead of a mechanical check valve (simple but still not 100% passive), the barrier between pressurant and oxidizer (as well as fuel, most likely) will be replaced with something known as a burst disk. According to Koenigsmann, only a handful (~4) of those valves exist and thus need to be replaced by burst disks, a relatively fast and easy fix.

I think it needs to be pointed out that, as I mentioned in a May update, the Draco/Super Draco thrusters had been extensively tested before this explosion.  In my mind, that means the burst disk fix is under-tested compared to the previous design.  There's no mention of how that will affect the schedule.

I got the link to this article by tracking down another story that SpaceX did a "routine static test firing" of the booster they intend to use to launch the Crew Dragon's first manned flight, expected no earlier than "early 2020".  Before that, the abort test on the Crew Dragon which will test their new burst disk design will be carried out.

Posted by SiGraybeard at 1:15 PM