What's the life of a rifle barrel?  About five seconds.  I probably thought the same things you're thinking, so keep reading.

This comes from an article posted to Midsouth Shooters Supply's daily emails from author Glen Zediker.  Glenn is credited as follows:


The preceding is a specially-adapted excerpt from Glen’s book Top-Grade Ammo. Available HERE at Midsouth Shooters Supply. Visit ZedikerPublishing.com for more information on the book itself, and also free article downloads.

The five seconds comes from the total time the barrel is exposed to the hottest gases from the cartridge being fired and the life shouldn't be stated as 5.00 seconds; it's more like 4-6 seconds.  In principle, you could multiply the number of rounds you shot times the amount of time they're damaging the barrel (if you could know that!) and derive the barrel's life.  According to Zediker, barrel wear largely comes from throat erosion from being torched by the cartridge.


Wear in a barrel is virtually all due to throat erosion. The throat is the area in a barrel that extends from the case neck area in the chamber to maybe 4 inches farther forward. Erosion is the result of flame-cutting, which is hot gas from propellant consumption eating into the surface of the barrel steel. Same as a torch. There is very little wear caused from passage of the bullet through the bore, from the “sides” of the bullet, from friction or abrasion. The eroding flame cutting is at or near the base of the bullet.

There's a lot of mythology in shooting, and some of it centers on wearing out barrels.  On one hand, it makes sense.  If some guy hears from a buddy that cleaning his rifle with a combination of raccoon menstrual fluid and Dexron automatic transmission fluid will help his barrel live longer, it's hard for him to evaluate that.  To do a real test, he'd have to test few barrels with different cleaning solutions but keeping everything else as close to identical as possible.  Take the handful of barrels to the range every trip, put the same number of rounds of the same load ammunition through the bunch, and so on.  People generally find something that works for them and stick with it.  If a trusted friend tells you some magic mix worked for them, it's reasonable to just use it.  There are so many variables that affect a long range shot that you simply don't have the time to experiment with all of them.

As a result we get things like “Is it true that using 110 gr. vs. a 150 gr. .308 bullet will extend barrel life because of its reduced bore contact?” and while the explanation is completely wrong, the lighter bullet will give better barrel life.  Not because of reduced bore contact, but because the lighter bullet accelerates faster and that reduces the time the flame cuts into the barrel.

The area a bullet contacts on the barrel has an effect, but because it relates to acceleration — greater area, more drag, slower to move.  Barrel twist also has an effect, but for the same reason — it takes longer for the bullet to spin up and get out of there if the twist is too high.  Yes, those black, "moly coated" lubricated bullets had lower friction and got out of the barrel faster, leading to less burning.


There are bullet design factors that influence erosion. A steady diet of flat-base bullets will extend barrel life. There’s been a belief for years and years that boat-tail bullets increase the rate of erosion because of the way the angled area deflects-directs the flame. And that is true! However, it’s not a reason not to use boat-tails, just a statement. We use boat-tails because they fly better on down the pike, and, ultimately that’s a welcome trade for a few less rounds. An odd and uncommon, but available, design, the “rebated boat-tail” sort of splits the difference and will, indeed, shoot better longer (they also tend to shoot better after a barrel throat is near the end of its life).

What about the common discussion about stainless vs. chromoly steel barrels in an AR?   Zediker's opinion is:


Stainless steel barrels will, yes, shoot their best for more rounds, but, chromemoly [sic] will shoot better for an overall longer time. Lemmeesplain: the difference is in the nature of the flame cutting effect on these two steels. Stainless tends to form cracks, looking like a dried up lakebed, while chromemoly tends to just get rough, like sandpaper. The cracks provide a little smoother surface for the bullet to run on (until they turn into something tantamount to a cheese grater). The thing is that when stainless stops shooting well it stops just like that. So, stainless will go another 10 to 15 percent more x-ring rounds, but chromemoly is liable to stay in the 10-ring at least that much longer than stainless steel. 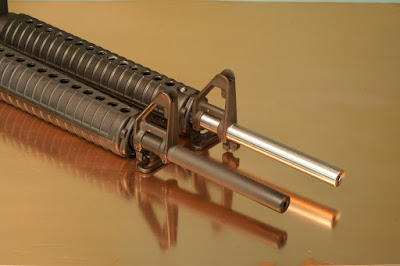 It's an interesting article.  Competition and especially NRA High Power competition shooters have probably heard some of this, but I'm betting it was scattered around in several places.  Likewise Precision Rifle competitors.  I obviously haven't covered everything, so if it sounds interesting to you, go read!