While waiting on circuit breakers for my radio troubleshooting, I returned to the flywheel saga I mentioned in Update #4 and last Saturday.  It's now finished.

Once I saw this picture in the camera, I saw a face in the flywheel and now I can't unsee it. Now I call the flywheel Mr. Bill.  Mr. Bill's nose (the flywheel's, not the puppet's) is drilled through for the 5/16" crankshaft and the end is reamed to 0.500" diameter by 3/16 deep.  This was my first puzzlement of the last week or so.  I ordered the gears specified in the prints and thought I just used them as provided.  Wrong.  The gear is very different in size from the drawing I have. 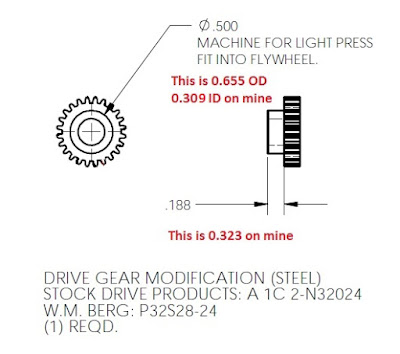 The answer was that I needed to machine the gear's hub to meet the dimensions on this print.  Note the upper right says this is a "light press fit into flywheel".  I accomplished that today.  I drilled and tapped the hub for a #6-32 setscrew, used that to fasten the gear to a little scrap of shaft, and used that shaft to hold the gear in the lathe's chuck so I could reduce it to size.  It's now done. 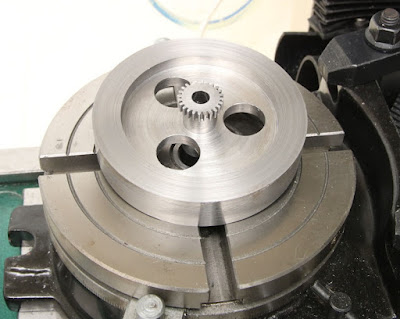 I think the inner web of the flywheel will get painted like I saw on another guy's model.  Flat black wrinkle paint.  I'm set up to do powder coating, so I found a paint I could use.

I also made a brain dead simple part - the crankshaft itself.  This just needed to be cut to length, so a quick cut on the bandsaw followed by facing and cleaning up the ends on the lathe.  It will get hard soldered (brazed) into a piece that I have yet to make - or yet to decide on how it should look.  The drawing looks like this and I'm focusing on the rectangular tab seen in all three views here:

A couple of builds I've been seen change that little rectangular 1-1/4 x 1/2 tab turns into a rather intricate piece designed to better balance while the engine is running.  One divides that tab at the center of the big hole, and replaces the bottom with a semicircle about 1" radius.  The other replaces the tab entirely, with a sector of a triangular wedge, heavier below the center of the big hole, and tapering to about that half inch dimension of the rectangular piece.

Not including this part, which is either a simple hour or so, but maybe a full day for the fancy part, I've completed four pages of parts for this engine.  There are 13 pages of parts; nine more.  Not all of them need to be made; so as a rough guess, I've made about a third of the parts.  Most of the rest are smallish parts (like the parts of this crankshaft).  The biggest part left is the piston, so I think that will be my next task.