Borepatch had an article yesterday arguing that we need to invoke game theory in dealing with gun control forces.  He starts with a premise every gun rights person knows and then briefly invokes Game Theory, a branch of mathematics that studies interactions between rational decision-makers as found in games, describes the interactions mathematically and attempts to find optimal solutions where possible.


Notice how whenever there's a shooting by some lunatic that we're inundated by calls for new gun control laws restricting normal Americans?  Every.  Single.  Time.

This happens because there's no downside for the Democrats.  Game Theory tells us that in situations like this (where one side is motivated to a goal and the other side passively watches what happens) that the motivated side will ultimately prevail.  Game Theory also tells us that a "tit-for-tat" strategy of pushback - a pushback for each time the other side pushes - will result in a stable outcome.

From here, Borepatch goes into Common Sense Abortion Control as where we push back.  For example, he describes the news in the last few days of the abortion doctor who died and left behind over 2200 trophy aborted fetuses in his garage.   Taking the Gun Control approach, we could argue we need extensive registration and inspection of all abortion facilities to prevent a recurrence of this sort "trophy harvesting".

For another example, he brings up the problem of children who are supposed to be aborted but survive.  Last year, there was weekly outrage (with no results) when Governor Ralph Northam of Virginia advocated for infanticide.


Again, taking the Gun Control approach, we need to require that all abortions be performed at a Hospital where care is available for babies in this situation.  Sure it will massively raise the cost of abortion, but you can't make an omelet without breaking a few eggs, amirite?

It turns out Borepatch isn't the only person advocating for use of Game Theory - or, at least, a view based upon the subject.  Open Source Defense posts a long and worthwhile examination of the Universal Background Checks arguments.  He starts with the observation that UBCs really do poll at 90% support, if the pollster simply asks, “Would you favor or oppose background checks on all potential gun buyers?”  Given that level of support, why haven't they already become law?

If you're in the culture, you probably already know the answer.  When people are told what UBCs really entail, support drops radically.  There have been actual ballots on these things.


UBCs were defeated in Maine, and passed by less than 1% in Nevada.  UBCs passed with 59% in Washington, a state that hasn’t elected a Republican senator since 1994 or a Republican governor since 1980. UBCs were rejected by Congress in the 1993 Brady Bill, specifically as a compromise to get the bill to pass — and the early ’90s were a high-water mark for support for gun control.

Earlier this year, the House passed a bill called HR8 on a party line vote by the Evil Party majority.  While called a Universal Background Check bill, HR8 (like most such legislation) redefines a transfer from being a permanent sale of a gun to simply loaning one to someone or letting them touch the gun.  David Kopel at the Volokh Conspiracy did an epic analysis of HR8.

Here's where the author, Kareem Shaya, goes into game theory.

An important part of this situation (as can be seen in the gun control lobby) is that if you're in Nash equilibrium, you have no incentive to change your strategy; that's another way of saying a Nash equilibrium is a stalemate.  It's where we are now.  As Shaya notes (and as we all have):


This is where people use the word “compromise”. But on guns, what they usually mean is, “Fine, let’s compromise: we’ll do none of what you want and only half of what I want.” Gun owners know the game theory well enough by now that they can never allow another unilateral loss. (You know how well they know it? If I just say “cake meme”, they all know what I’m talking about.) Gun control groups are in the same boat incentive-wise, and so can never sign onto a reform of existing gun laws.

Given the stalemate of Nash Equilibrium, nothing is going to change.  The gun control side isn't going to give up anything to the gun rights side that they think they've won through hard work and the gun rights side has no reason to believe offers to "compromise."  Therefore, we need to change things up to gain rights back; as if that ever happens.  Will Borepatch's idea gain anything for gun rights?  Hell if I know.

Kareem Shaya has this to say on the Nash Equilibrium:


There is an outside chance that given the right emergency, a one-sided law could pass by force. But that could — for these same game theoretic reasons — set off a chain-reaction of backlash that gets arbitrarily bad. Like anywhere from Waco bad to civil war bad. 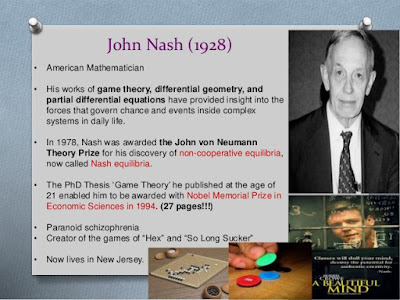