I've written a few times about recovering from our lightning strike.  The majority of the work in the ham shack was covered in my Post-Mortem piece from the 3rd of the month.

It has taken me a while to get here, but I got the antennas fully working and back up today.  I ended up replacing most of the cabling, replaced my antenna rotator and its cable, rebuilt the balun transformer on the HF antenna and did essentially the same thing to the VHF antenna by replacing it's cabling and feed wiring. 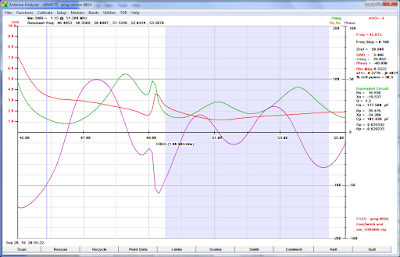 When I last posted about trying to fix the amplifier, I mentioned a couple of panel mounted 20A breakers, one of which needed to be replaced.  Those parts came in and I mounted them last weekend.  The little tag I had put on one pair of wires managed to fall off, so given four wires, I got it wrong and wired one of the breakers directly across the 240 VAC line.  That tripped the house's circuit breaker, not the one in the amplifier.  Once I cleared that and re-wired the breakers, the breakers were fine but it now blew the same two fuses I showed in that last post and I repeat here. 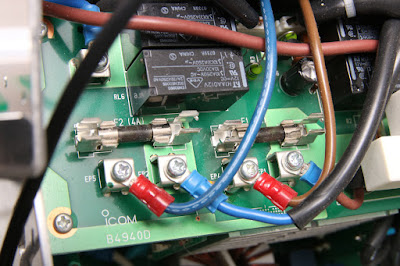 I don't have much in the way of circuit details, which is complicating fixing this, but I can see the input to those fuses goes two places.  First, some of the AC is used on the printed circuit board the fuses are mounted to.  Second, and you can see it quite clearly in that photo, there are two wires (blue on the left, brown on the right) that come onto the board, go through the fuses, and then go to another board.  That board is a power supply that other people have reported problems with.

Figuring if I disconnected half the places the 240 VAC goes, that will tell me which half blows the fuses, I disconnected the blue and brown wires to the other board.  Plugged it in and the fuses are fine.  Now I need to try to troubleshoot the board that blows the fuses.  It looks fairly normal with no AC applied.

Getting my antennas back operational was a priority for me because now the station is fully usable.  It doesn't have all the capabilities it had before the lightning strike, but I can operate any amateur band from 3.50 MHz through 450 MHz.  The amplifier is really pretty low priority.  Of all the things I'd consider important to the operating I want to do, the amplifier is pretty much the bottom of the list.