A little over a month ago, we were blasted awake by an extremely loud blast of thunder and within a couple of hours realized we had the worst damage we'd ever had from lightning and a lot was damaged.  As the weeks have gone by we discovered more of what was damaged and now think we've found everything.  We've have been able to fix some things, replace some, get some serviced and are still working on a few others.  This is still going to take a while.

While we experienced damage to a few things elsewhere in the house, the most damage was in the ham shack.  The control box for my antenna rotator blew out, taking out the computer it was attached to, and the computer took out the radio it was attached to (at least on that one function).  One antenna showed up as open, the other two are fine.  Finally, the big thing, I have a linear power amplifier that won't turn on.  I've taken that apart to pull out the power supply for more troubleshooting.  When I found the part that I think is blown in the radio, I realized it's in a specialized package I'm not really set up to work on.  (It's in a 36 pin QFN, drjim)  I opted to send the radio for factory service.  Those guys wince when they have to replace those.

Since then, I've been trying to figure out exactly what happened.  I have a small tower by many ham's standards, just 20 feet tall with a mast that gets that up to 26.  Many people would assume the tower was struck, since the damage focused on things in or on the tower, yet there's no damage apparent to it.

Off to the tower's northwest is an oak tree that's now in the range of 35 to 40 feet tall, so quite a bit taller than the tower.  To its south are a couple of palm trees that are close to 30 feet tall and to its southwest is a maple tree that 's also in that 35 to 40' tall range, too.

I've seen pictures of trees that have been hit by lightning and I've looked at the oak for signs it was hit - the bark splitting or blown off the trunk.  The tree showed no apparent damage.  Sunday, while putting up the shutters for Dorian, I found myself standing over near those two palm trees.  That's when I noticed interesting, telltale signs on the bark. 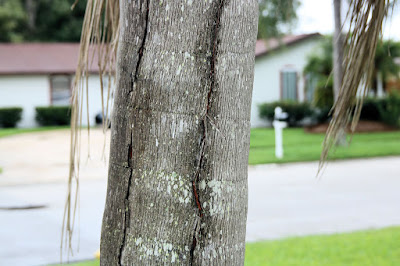 There are four or five trails from the top to the bottom of the tree.  More or less straight along the entire trunk, each looking blown out from the inside.  It wasn't until we were done with the shutters that I paid more attention and looked up to where the palm fronds grow out vertically (fronds would be called leaves on any other tree); I noticed one was bent over nearly double near the top of the tree. 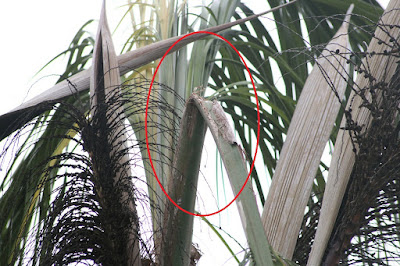 The stem portion of the frond (circled in red) appears broken and even blown apart.  It looks like the palm took the lightning strike, and induced a strong current in the tower, which is about 25' away.

I had taken down my antennas on Saturday and inspected the damaged antenna, finding no evidence of damage.  On the other hand, I hadn't taken apart the part most likely to be damaged, a transformer.  I was more interested in getting it sealed well so that when the storm is over I could look into it.  I capped the connector on the cable that attaches to the antenna and sealed it against the rain.  Today, with the storm looking less and less like a threat and with time available, I attached the cable to the bad antenna to my analyzer.  My reasoning is that I know the cable is open now, so if disconnecting the cable from the antenna didn't change the results I must have substituted one open for another.  Today's plot looked exactly like my last plot of the blown antenna.

The antenna analyzer has a function that will tell you the distance to an open or a short on a bad length of cable.  That function told me the trouble was 8.9 feet from the instrument.  I realized that meant it was inside the room, and I quickly realized what it was.  I had a surge protector where the cable enters the house, attached to my heavy ground wire.  It was blown. 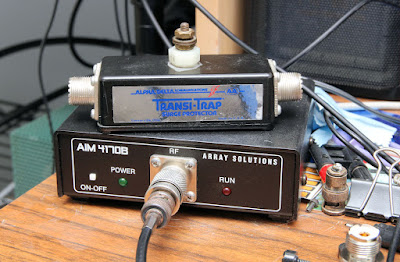 Replacing the Alpha Delta Transi-Trap with a dual female connector made the instrument tell me the open circuit was now 56 feet away, which is close enough to how long the cable is.  As luck would have it, I have a replacement surge protector (probably better quality than this one) from a company that got out of that business.

Lightning causing damage by inducing current in a nearby conductor might well be the most common type of damage there is.  Lightning strikes vary in their current, but currents ranging from tens of thousands of amps to well over a hundred thousand amps have been studied.  Like an electrical transformer, current surging through a conductor (of sorts) like a tree induces current to flow in other conductors nearby.  How large that current is depends largely on the distance.  It can be coupled by the magnetic or electric field.  I think the current flowing in my radio tower induced currents in power lines in the walls which flowed around the house.  We had concluded earlier in the aftermath that things with long wires attached were more likely to be damaged.  It all adds up.

I'll know within the next couple of months if the palm will survive the strike or if it's already dead and just doesn't know it.