It seems to me that my interpretation of and reaction to 9/11 changes every year.  Like everyone, I will always remember where I was and what I was doing the Day the World Changed. Some years ago, I wrote:


On that bright Tuesday morning, I was out of the office at a small company that we contracted to do some testing on our radios.  As the technician and I were setting up the test, the company's secretary/receptionist came in and said the local radio station had a bulletin that an airplane had hit the World Trade Center.  My first reaction, perhaps strangely, was that radio navigation systems can't be that wrong, it must have been a terrible accident.  Act of war did not enter my mind.  As the morning went on, a TV set was put in place and large antenna hooked up outside (there are no local over the air TV channels).  We watched the second plane hit and quickly realized this was no accident.  That's when the thoughts of Pearl Harbor and other acts of war started.  I've heard it credited to Ian Fleming as his character Auric Goldfinger, but the saying goes, "Once is happenstance, twice is coincidence, three times is enemy action."  And so it appeared that day.

In the days that followed, I learned that friends were affected by the events of 9-11, but weren't directly involved.  A co-worker was on business at Boeing, and had to rent a car to drive home.  A very close friend was waiting at JFK airport to fly home, and saw the attacks in real time.  He also had to rent a car and drive home.  A cousin lives within viewing distance of the Twin Towers and watched it. And now I have friends who have sons in the armed forces in Afghanistan, and others who have been in Iraq.  We need to remember we are at war, even if our enemy isn't a convenient nation-state.  You can pretend we're not at war if you'd like, but if someone swears to destroy you, it's prudent to believe them.

Despite successes on various battlefields, and serious reductions in the capability of the other side, the fact remains that this is not a fight that's over.  It doesn't even appear to be a fight with a prospect of going away, at least as it's being conducted.  Perhaps Aesop's right and the proper response should have been MIRVs taking out Mecca, Medina and more - turning much of the muslim world to radioactive glass.  As others have said, the other side in this war is determined to play the long game and to destroy Western Civilization.  They've been playing this game for centuries.  Today, look for proof at pretty much all of western Europe, with the one or two exceptions that aren't allowing "refugees."  Or how about Representative Ilhan Omar's view that "some people did something" so she gets to play victim?  The west, mostly led by the postmodernists who are themselves determined to destroy western civilization, don't seem particularly interested in trying to stop the muslims.  Proof?  Look at pretty much all of Western Civilization.

Much like the joke about lawyers, the bad Muslims give the other 1% a bad name.

But we know where talking about carrying out a genocide leads; we have the history of the times it has been tried.  Heck, there are calls now for killing all the whites, and I'm sure if you listened more than I can stomach you'd find calls for the genocide of all sorts of folks.  Without an effort to drastically curtail their efforts to destroy western civilization, this low level fighting against the muslim world will go on for the next 1400 years as it has for the last 1400 - or until they win.  The only times it has slowed in the last 1400 years was when someone ("Charles Martel, Ferdinand of Spain, Vlad The Hero, and the entire interred Knights of Malta" as Aesop put it) responded brutally to brutal attacks.

Then there's the third group of feelz.  That group of feelz thinks that 9/11 was the day the Republic officially died.  That's probably stupidly naive.  That argument can be made going back to FDR, Wilson, and Lincoln.  The USA Patriot Act, the TSA clown circus and all the following laws that have killed civil liberty in the US are simply the ones at the top of the pile and so the most visible.  That group of feelz is just weary of the stories of being involved "over there" for as long as we have.  Stories of peace talks with the freakin' taliban at Camp David, this week of all weeks.

Condoleeza Rice made an appearance on a couple of talk shows yesterday.  She was one of the brains behind the 9/11 responses, so has to be considered biased, but I want to know what she thinks.  Her point was we've been "involved" in Germany and Japan since the end of WWII - 74 years.  We've been "involved" in South Korea only a few years less.  Why should we think we wouldn't be involved in the Mideast after only 18 years?  It's true the Germans or Japanese don't make killing Americans in their countries a sport, so rewarding that murder by running away will only make it worse.  It will only invite them here.  As if they're not already here.

In the end, I always think of it by personalizing it.  Imagine you were in those buildings.  It's a normal workday, maybe you had the usual morning rush, getting your kids off to school.  All normal.  You get to work, get settled into your place, start digging into whatever sort of problems your job has you solving.  Just like every other day.  Suddenly, because of a 7th century mandate, as interpreted by a nutjob in a cave half a world away, your building shakes.  Pretty soon it's on fire.  You try for the stairs but can't get there, the stairwell is choked with flames and smoke.  You're trapped.  The fire is getting worse.  There's nobody coming to help you that can give a tiny bit of hope.  The only way out is death.  But staying where you are is being burned to death.  Which way do you take?  Do you burn to death, slowly, agonizingly, or jump and get it over with in one moment, after a long fall to think about it? 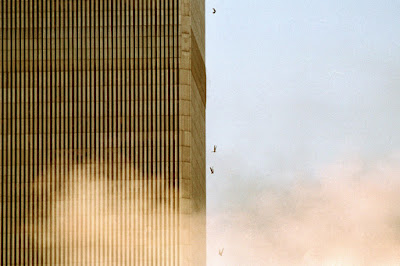