The Climate Change Hoax is Worse Than You Thought

There's an article on Watts Up With That, featured at the top for some amount of time that stunned me when I read it.  The article is called, "Propagation of Error and the Reliability of Global Air Temperature Projections, Mark II."  Mark I was an article he wrote six years ago and started working to get published in the peer-reviewed science literature; Mark II is the result of six years of revisions.   The author, Pat Frank, is a Ph.D. chemist with the Stanford Linear Accelerator (SLAC) in Silicon Valley.  As he puts it, with "30 years of publishing in Chemistry" in his background.

The paper that this is based on can be found here , where it can be downloaded; the Supporting Information (SI) is here (7.4 MB pdf).

It goes without saying you should read the whole thing.  As usual, I'll lift some quotes to get you started.


In my prior experience, climate modelers:
... ...
Climate modelers are evidently not trained in the scientific method. They are not trained to be scientists. They are not scientists. They are apparently not trained to evaluate the physical or predictive reliability of their own models. They do not manifest the attention to physical reasoning demanded by good scientific practice. In my prior experience they are actively hostile to any demonstration of that diagnosis.
...
In short, climate models cannot predict future global air temperatures; not for one year and not for 100 years. Climate model air temperature projections are physically meaningless. They say nothing at all about the impact of CO₂ emissions, if any, on global air temperatures.
...
From the perspective of physical science, it is very reasonable to conclude that any effect of CO₂ emissions is beyond present resolution, and even reasonable to suppose that any possible effect may be so small as to be undetectable within natural variation. Nothing among the present climate observables is in any way unusual.

The analysis upsets the entire IPCC applecart. It eviscerates the EPA’s endangerment finding, and removes climate alarm from the US 2020 election. There is no evidence whatever that CO₂ emissions have increased, are increasing, will increase, or even can increase, global average surface air temperature.

The analysis is straight-forward. It could have been done, and should have been done, 30 years ago. But was not.
...
All the anguished adults; all the despairing young people; all the grammar school children frightened to tears and recriminations by lessons about coming doom, and death, and destruction; all the social strife and dislocation. All the blaming, all the character assassinations, all the damaged careers, all the excess winter fuel-poverty deaths, all the men, women, and children continuing to live with indoor smoke, all the enormous sums diverted, all the blighted landscapes, all the chopped and burned birds and the disrupted bats, all the huge monies transferred from the middle class to rich subsidy-farmers.

In a way, author Frank is probably overly optimistic.  Despite evidence of previous papers that should have called a halt to the climate alarmism but were ignored, he's hoping this paper makes a difference.  I hope he's right and some sanity returns to Clown World, but I fear he's not. 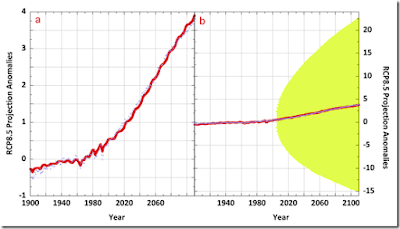 When plots of future temperatures are presented, you usually get what's on the left.  A model showing smoothly increasing measured temperatures.  If the uncertainties are included, errors propagated forward in time, and other standard techniques employed, you get the rescaled plot on the right.  The prediction for the temperature at 2100 isn't that global temperature goes up 4 degrees; it's 4 degrees +22 and -15.  When the uncertainty is 10 times your prediction, your prediction isn't worth much.  Plot from the original article at WUWT.