My After Action Review on Dorian

The storm missed us by a wide margin, turning north farther east than originally expected and staying well offshore.  The local NWS said we got 0.76" of rain yesterday and 0.37" today.  Let's assume it was all from Dorian, and say we got 1.13".  The highest wind measured at the airport in two days was 38mph and the highest gust was 51.  We were under hurricane warnings through early morning today, which means conditions of sustained 75 mph or greater winds were expected.  The last forecast graphic I have for our area predicted winds from 75 to 110 mph.

As a result, it's hard to assess an After Action Review because there really was no action.  Yes, we took down antennas, put up shutters, made sure batteries were charged and ice was on hand, but that's routine prep stuff.  We never needed the flashlights, batteries or the ice.  Our generator never came on.  It was just a quiet day here.

On the other hand, it's very easy to get cocky over hurricanes and warnings when they're consistently alarmist and, frankly, wrong in critical predictions.  That could lead to people not paying attention when they need to and with this storm, we needed to pay attention.  As Dorian closed in on the Bahamas, it became one of the strongest hurricanes ever recorded in the Atlantic.  Winds were 185 mph sustained with gusts to 200.  The storm moved at an incredibly slow 1mph over Abaco and then stalled over Grand Bahama Island; DiveMedic at Confessions of a Street Pharmacist posts a pair of  commercial satellite photos of the destruction on Grand Bahama, and they are mind-boggling.  I combined those two images into this one.  It looks like Grand Bahama has been reduced to about 1/3 the amount of dry land it used to be. 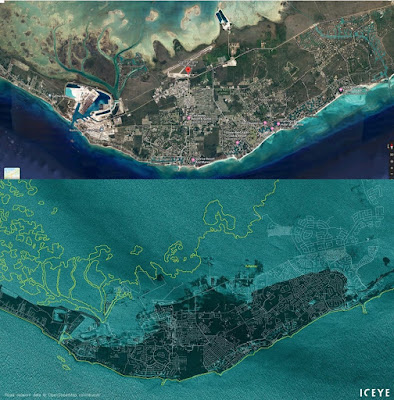 Everything that's outlined in yellow in upper portion of the bottom picture is land that's no longer there.  All of those light lines in the upper right of the bottom view represent streets and residential areas that don't exist.  I know the official death toll has been announced at 20, it's just hard to imagine that only 20 people would have been lost in that kind of devastation.

Since then, I've found a larger scale image on NPR that overlays the two views at identical scales - these views are slightly different scales.

Government at all levels seems to say "when in doubt, evacuate", but that assumes there's no cost to evacuating which is never true.  I'm talking not just about the cost of gas, and hotel rooms, but also disruption to work.  What if the people don't have a car they could trust to drive long distances?  What if they don't own a car at all?  In this storm, it was possible for people on the east coast to evacuate to the west coast, but there aren't many routes across the state; just more routes than going north out of the state.  The worst thing that could happen might be getting stuck in your broken down car as the storm builds around you.

The same atmospheric changes that pushed Dorian away from us are what caused it to stall and wipe out Grand Bahama (explained in great detail here).  It's unfortunately usually true with these storms that any change that's better for one location is worse for another.  The stall caused the storm to stir up the water underneath it so that a cold water upwelling occurred, which started sapping the storm's strength and the winds started dying down.  Essentially there were two competing weather systems, one wanting to steer it north and one trying to push it south.  The steering winds canceled each other out causing it to stall.  An approaching upper level low pushed the system on the west side south allowing the northward motion to start, and the ULL is now pushing Dorian near the Carolinas.