In the week since I first wrote about the SpaceX Crew Dragon "Anomaly" (aka - "cratering explosion on the test stand"), some small details have started to dribble out of the investigation.

Ars Technica reports that the vehicle exploded with less than one second left in the countdown to engine firing.


In the company's most expansive comments to date, [Hans] Koenigsmann said the "anomaly" occurred during a series of tests with the spacecraft, approximately one-half second before the firing of the SuperDraco thrusters. At that point, he said, "There was an anomaly and the vehicle was destroyed."

More importantly, to my way of thinking, they confirmed this was indeed the capsule that flew to the Space Station in early March.  That was reported, but not confirmed (that I know of) until this statement.


The lost spacecraft is the same one that successfully flew a demonstration mission to the International Space Station in March. (During that Demo-1 mission, the SuperDracos were not activated.) After the March flight, the Dragon spacecraft was being prepared for a launch abort test this summer.

Why is this important?  The capsule went through an entire flight sequence, which includes getting dunked in saltwater when the capsule splashes into the Atlantic (in this case).  Getting dunked raises the possibility of saltwater intrusion into portions of the controls, the wiring, or the engines themselves, which in turn raises the possibility of galvanic corrosion (dissimilar metals in a conductive electrolyte) or some other effect of saltwater.

There has been a lot of attention paid to the SuperDraco engines themselves as the source of failure.  That's reasonable when you think of their job as being to control a long-duration explosion and use it for an intended purpose, but it could well be leaping to a conclusion.


It is too early to determine a probable, or root, cause, but Koenigsmann expressed confidence in the SuperDraco thruster system. He noted that SpaceX has tested these powerful thrusters more than 600 times at its test facilities in McGregor, Texas. Moreover, they have performed well in hover tests as well as a launch pad abort test in 2015. "We have no reason to believe there’s an issue with the SuperDracos themselves," he said.

The Wikipedia article on the engines reports that SpaceX first developed the "Mark 1" engine over a decade ago, with the first engine being fired in June of 2012.  By the end of that year, the ground-test engines had been fired a total of 58 times for a total firing-time duration of 117 seconds 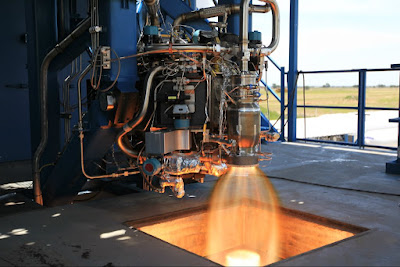 A second version of the engine was developed in 2013, this one manufactured with 3D printing rather than the traditional casting technique.  By July 2014, the 3D-printed engine combustion chamber had been fired over 80 times, for a total duration of more than 300 s, and it likewise completed a full qualification test. 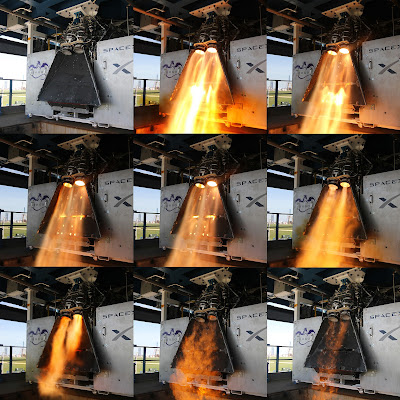 This SpaceX montage of the 3D printed SuperDraco engines being test fired appears in the Ars Technica article.  It says each engine is tested 300 times.  There are four of these SuperDraco pairs (8 engines) on the Crew Dragon for the escape system.

Since this was a test firing on a dedicated test stand, their advantage in the failure analysis was that everything they could think to measure was measured.  The investigators are swimming in data, trying to understand.  The investigation is a joint SpaceX/NASA investigation, and Alabama senator Richard Shelby (a vocal backer of NASA's Space Launch System, and with it, Boeing) is voicing complaints/concern over that.


One of the sharpest critics of SpaceX, Alabama Senator Richard Shelby, said Wednesday that NASA should conduct an independent investigation of the accident. He appeared unhappy with NASA's decision to conduct a side-by-side investigation with SpaceX. "Can you be independent, and reach independent conclusions, if you're doing something jointly with somebody?" he asked during a Senate committee hearing. "That's not the norm, I think, and it's something we'll check out."

The goal for the Crew Dragon after this test was to be a live test of the abort system by launching a Falcon 9 with the Crew capsule in position and then firing the abort system, directly simulating a launch abort.  The tentative schedule was for that test to occur in the summer, with the first manned flight to the ISS possible by early October.  This failure has rocked that schedule, and without a definite root cause for the explosion issued there's no replacement schedule.  I think all these investigators know it's more important to get it right than just get it done. 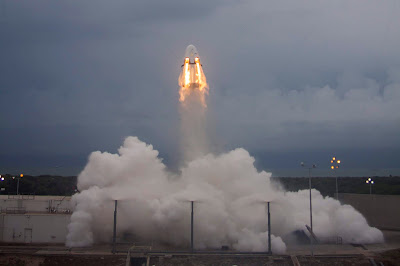 A 2015 pad abort test similar to the one that failed 12 days ago.  The 8 SuperDraco engines can be seen lifting the capsule off the pad.