While I've covered the commercial space flights of SpaceX, I've had less to say about our neighbor up the road, Blue Origin.  (While out around the neighborhoods, I recall seeing a guy in a Blue Origin tee-shirt).  Last week, Jeff Bezos revealed his plans and vision for his rocket company Blue Origin according to that large piece in Ars Technica.


The world's richest person, Jeff Bezos, unveiled his sweeping vision for humanity on Thursday afternoon in a Washington D.C. ballroom.  With the lights dimmed, Bezos spoke on stage for an hour, outlining plans for his rocket company, Blue Origin, and how it will pave the way to space for future generations.

We have seen bits and pieces of Bezos' vision to use the resources of space to save Earth and make it a garden for humans before. But this is the first time he has stitched it together in such a comprehensive and radical narrative, starting with reusable rockets and ending with gargantuan, cylindrical habitats in space where millions of people could live. This was the moment when Bezos finally pulled back the curtain, in totality, to reveal his true ambitions for spaceflight. This is where he would like to see future generations one day live.

The highlight of the talk (from my standpoint) is that Bezos unveiled their planned lunar lander called (what else?) Blue Moon.   The base configuration is capable of delivering up to 3.6 tons to the lunar surface.  It's envisioned as a lander - that means one way only - but there's also a configuration that has "stretch tanks," and could carry up to 6.5 tons to the lunar surface.  This would be large enough for a crewed ascent vehicle, pictured here. They just say that will be "built by another company". 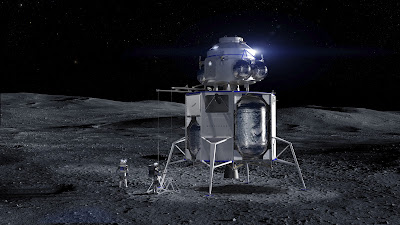 Ars reports that Blue Origin is being funded by Bezos personally to the tune of about $1 Billion per year.  They point out that he didn't say whether he would fund the development of Blue Moon without NASA contracts.

The rest of the talk focused on Bezos' vision for the future.  Everyone has probably heard that his (presumably) friendly rival, Elon Musk at SpaceX, envisions colonizing Mars.  Musk wants to terraform Mars: turn Mars green and vibrant to make humanity a multi-planet species and provide a backup plan in case of calamity on Earth.  Bezos wants to preserve Earth at all costs, saying "there is no Plan B."

Instead of moving off to Mars, Bezos is an advocate of colonies in space.  Not International Space Station style; not even rotating wheel-in-space from the movie 2001-style.  Those are thousands of times too small.  Instead, he imagines colonies of millions of people living in permanent colonies in space.  About a million people per colony.


Other worlds in the Solar System lack Earth's atmosphere and gravity. At most, they could support perhaps a few billion people, Bezos said. The answer is not other planets or moons, he said, but rather artificial worlds or colonies in space known as O'Neill cylinders.

These are named for their creator, Gerard O'Neill, who was a professor at Princeton University where Bezos attended college in the early 1980s. In his book The High Frontier, O'Neill popularized the idea of free-floating, cylindrical space colonies that could have access to ample solar energy. Bezos was hooked then and became president of the campus chapter of Students for the Exploration and Development of Space.

And he is still hooked today, imagining up to 1 million humans living in each cylinder built from asteroid materials and other space resources. Each environment would be climate controlled, with cities, farms, mountains, or beaches. "This is Maui on its best day all year long," Bezos said. "No rain. No earthquakes. People are going to want to live here." And when they need to, they could easily fly back to Earth.

I read the first book I linked to (Colonies in Space) and it was also about O'Neill's ideas of permanent civilization in space.  It's a bold vision, if not a little short of colonizing another world.  As he points out, though, without access to materials from space such as metals from asteroids, water and other fuels that weren't hauled into orbit from the Earth, neither colonization is likely to go far.  While the piece yesterday talked about massive amounts of petroleum here on Earth, the first molecule of oil on Mars has yet to be found.  (Assuming it's there).  It goes without saying that none of this goes anywhere without low cost access to space, something that, to his credit, Bezos has been pursuing all along, as has Musk.


Bezos said he believes that—if this generation builds the infrastructure needed to enable humans to get into space and develop an economy there—future generations will pick up the ball and run. "People are so creative once they're unleashed," Bezos said. 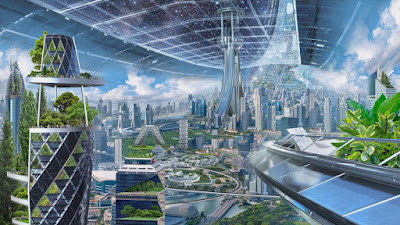 One of five artist's conceptions of the kind of O'Neill cylinder colonies Blue Origin wants to see built.