First Piece For the Webster Done

OK, that's not technically true.  The part isn't "done done" as they say, there's one hole that needs to be tapped and I needed to order the tap.  It's expected on Saturday, but it's coming by USPS delivery and they regularly beat their estimated delivery dates.  Given the size, I think it will be pretty easy to tap that hole which is why I'm calling it done.  The hole is for the spark plug.  It's a widely used motorcycle/small engine plug with a metric thread.

I showed this view a couple of days ago, 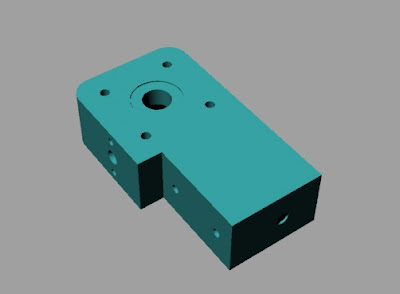 and here's the part this morning. 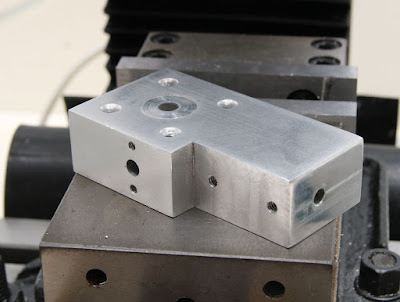 You'll note that the top corners (on the left) aren't rounded off like the computer model.  That's called "optional" on the prints, and I'm just not sure I'm going to do it.  I have a little while to decide.

On the left side, above the cutaway, those two holes are 4-40.  I don't think I've ever tapped 4-40 blind holes before.  Blind holes tend to get some of the chips that don't get pushed out of the hole by the tap and accumulate in front of it, so I was super cautious about breaking the taps.  They survived just fine.  Five holes in three different screw sizes: 4-40, 6-32 and 10-32.

Not visible in this view is a large bored out area: behind that large hole in the top middle.  That's the combustion chamber for this engine and gets mounted to the cylinder, a lathe project in the near future.  The bore is 1.000" diameter by 0.500" deep.

Next is to switch over to the other piece I wrote about Saturday, the base plate.  This part is mounted to that plate via the hole on the right (bottom).