Everyone - Left, Right, Up, Down - Should Be a "Climate Skeptic"

I've been meaning to post this for the last week, after seeing a link from Sense of Events about a long interview with Dr. Judith Curry in City Journal.  The author starts with the things everyone has heard of, from the religious zealot-like warnings of floods that are on fire, to the general distrust of those reports, and some even-handed approaches that "everyone declares a scary apocalypse to make money off it."


Not being a climatologist myself, I’ve always had trouble deciding between these arguments. And then I met Judith Curry at her home in Reno, Nevada. Curry is a true climatologist. She once headed the department of earth and atmospheric sciences at the Georgia Institute of Technology, until she gave up on the academy so that she could express herself independently. “Independence of mind and climatology have become incompatible,” she says. Do you mean that global warming isn’t real? I ask. “There is warming, but we don’t really understand its causes,” she says. “The human factor and carbon dioxide, in particular, contribute to warming, but how much is the subject of intense scientific debate.”

As you might expect of someone with her background (or might hope to find in someone of her background), she comes across as a voice of reason.  She understands the subject on a very deep level, and has tremendous depth of knowledge at recall.


This brings us to why Curry left the world of the academy and government-funded research. “Climatology has become a political party with totalitarian tendencies,” she charges. “If you don’t support the UN consensus on human-caused global warming, if you express the slightest skepticism, you are a ‘climate-change denier,’ a stooge of Donald Trump, a quasi-fascist who must be banned from the scientific community.” These days, the climatology mainstream accepts only data that reinforce its hypothesis that humanity is behind global warming. Those daring to take an interest in possible natural causes of climactic variation—such as solar shifts or the earth’s oscillations—aren’t well regarded in the scientific community, to put it mildly. The rhetoric of the alarmists, it’s worth noting, has increasingly moved from “global warming” to “climate change,” which can mean anything. That shift got its start back in 1992, when the UN widened its range of environmental concern to include every change that human activities might be causing in nature, casting a net so wide that few human actions could escape it.

Scientific research should be based on skepticism, on the constant reconsideration of accepted ideas: at least, this is what I learned from my mentor, the ultimate scientific philosopher of our time, Karl Popper. What could lead climate scientists to betray the very essence of their calling? The answer, Curry contends: “politics, money, and fame.” Scientists are human beings, with human motives; nowadays, public funding, scientific awards, and academic promotions go to the environmentally correct. Among climatologists, Curry explains, “a person must not like capitalism or industrial development too much and should favor world government, rather than nations”; think differently, and you’ll find yourself ostracized. “Climatology is becoming an increasingly dubious science, serving a political project,” she complains. In other words, “the policy cart is leading the scientific horse.”

In an environment like Curry describes, real science is impossible. There will be no progress on the actual important questions about how the climate systems work without real science, just dogma will prevail.  The real systems are extremely complex and the models are simple linear systems.  The data fed into those models has been adjusted until it bears little resemblance to reality.  This mess won't be fixed with the current approaches. 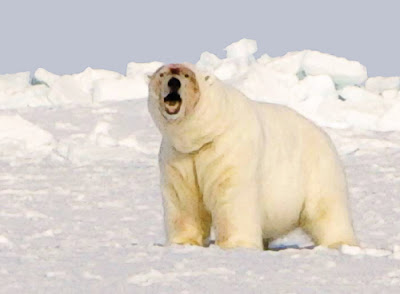 Far from undernourished, this fat polar bear has been eating enough seals to have his gut almost touching the ice.  From Polar Bear Science, the web presence of polar bear expert Dr. Susan Crockford.

The article and interview with Dr. Curry isn't long and well worth the time to read.