Many of you will have read Irish's note that he had given up on the Drudge Report last weekend.  Me, too.  In the case of Drudge, he has been sliding into irrelevancy (by sliding to the left) for a while now.  I understand it was a business decision to move his main advertising revenue to a different provider and had something to do with his father's own website.  According to an article on Investment Watch, linked to by a Twitter comment to Mark Dice, also referenced on Irish (whew!):


“He recently signed on with a Google affiliated company, which purchased Matt Drudge’s father’s website, RefDesk, as part of the deal.

“Frankly, I’m concerned this is the sole reason Drudge went mainstream and to the left: to satisfy his new advertising agency.

“The agency is called Granite Cubed. The timing of when all this went down is not a coincidence.

I had been noticing the slide to sounding like the usual media on Drudge for a while.  I started going to a place called Rantingly.  After some thinking about where I got the link, I believe it was a comment to a similar article on Stilton's Place.

Rantingly sort of looks like Drudge's layout, with some differences that are easy to get used to.  The right column is Twitter feeds from the conservative universe: the President, Dan Bongino, Candace Owens, Buck Sexton, Tom Fitton and more - in no particular order.  I suspect that changes with activity and how people react to them.  The left column is news stories for four or five screen heights, followed by links to another large block of good sites.  Give it a look.

The other issue that needs to be brought up is that Fox News Channel (FNC) has slipped left, too.  You may recall that over two years ago, we did a piece on the management changes at FNC and that the next generation taking over top management didn't attempt to hide the fact they wanted to kill the network.  Their only problem was they were frustrated that FNC was the goose the just kept laying golden eggs and funding the rest of their empire.


Back on 4/20, when I wrote that Bill O'Reilly's firing didn't bode well for the future of alternative voices on the news, I passed on that Rupert Murdoch's son, James, was apparently going to scuttle the channel.  He "regarded many of the people at Fox News as thuggish Neanderthals and said he was embarrassed to be in the same company with them".


In the Hollywood Reporter piece, James Murdoch is not in the least bit trying to disguise or hide the message that he wants to kill Fox News as we know it.

There's just no real alternative, at least that I can get.  Here's the thing: Fox News has never claimed to be conservative, they've just given air time to a few big-name conservative opinion pundits.  As far as I remember, and I've been watching since around 9/11, they've never used a motto claiming to be constitutionalists, libertarians, or conservatives; the motto has always been, "Fair and Balanced."  Someone's idea of good commentary came to be having two people on screen representing both sides in a debate and then have them talk over each other and bicker like four year olds, instead of waiting for the other guy to give their side.  It drives me nuts. There's a handful of pundits that I just won't listen to because I know they're just going to talk over the other guy.  I find I listen to FNC programs less and less every day.  If James Murdoch wanted to drive viewers away, it's working with me.

I hear good things about One America News Network (OAN or OANN) and they could be better, but it seems the only way to get them is through AT&T or DirecTV. We cut the cable and switched to internet streaming about 18 months ago, and they're the only major streaming service that carries OAN.  There's a minor streaming service I'd never heard of that carries them but doesn't offer anything else that interests me, KlowdTV.

It seems to me to be a business opportunity.  Depending on broadly you want to define things, people are either oriented to prefer deciding what they want or oriented to prefer being controlled.  Sure that's broad brush, and there are people who describe themselves as "socially liberal but fiscally conservative" and other variants, but either you control your life or someone else does.  In comparison to the number of media outlets that represent that major dichotomy, instead of an equal mix, there are far more that represent the latter ("someone else" controls you) than the former.  The streaming service we use has 12 news channels, with only one, Fox News, putting forward any real conservative viewpoints. 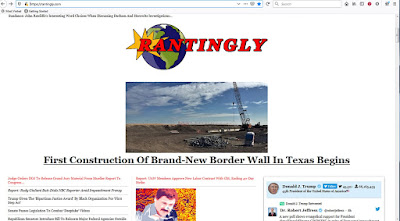