I Need to Work on Visualizations

The numbers in this graphic showing just how important it is for cities in the US to be banning straws seem to line up with numbers I used in article on the subject back in July of '18, but I'm sure the graphics will be more useful to more people than just numbers.  The vivid visualization or the right visual meme has a bigger impact than plain numbers do. 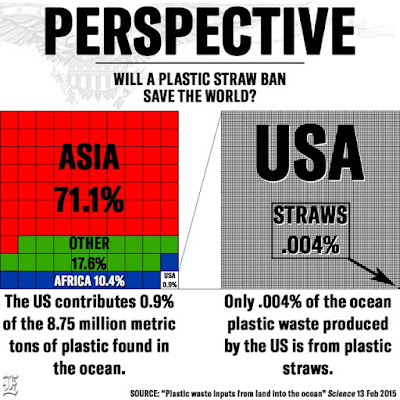 The bottom line is that straws from the US constitute 0.004% of 0.9% of the world's plastic pollution.  Which is only 360 parts per billion, and this fact is easier to see in those pictures than  just by using words.

The problem is how many significant figures are really there.  I bet the only remotely accurate part of that data is the figures associated with the US and Europe (under "other",  I assume).  The amount of straws in the waste stream is highly suspicious.  That number appears to come down to one science project done by a 10 year old kid in 2011.  The kid called a straw manufacturer (or a couple) and came up with the quote “500 million straws used daily … many end up in oceans,” which is used by everyone as if it were known as precisely as a physical constant like the speed of light.  I'd be surprised if those percentages of plastic contribution by continent was accurate to three decimal places.  Which is saying any changes to the world totals from a US ban aren't even a rounding error.

I believe I found the graphic on the Daily Timewaster at some point this week.

Labels: enviro-nuts and flakes, Me