I Guess I'm In Another One of Those Awkward Phases

This one has to do with hamfests, which are usually annual events in any given city where hams get together to socialize, sell extra gear, buy extra gear, attend talks and more.  By "annual in any given city," I mean that in many places in the country a local ham club usually hosts one annually, but that within a couple of hours of driving there might be a few in a year.  If you're into taking longer trips there's one going on every weekend for various driving distances.

Here in the Silicon Swamp, the annual fest is held by the biggest club in the county, the Platinum Coast Amateur Radio Society.  I know I've mentioned going to it pretty much annually and while we've gone to the granddaddy hamfest in Dayton, Ohio, including the last one actually in Dayton (they had to move to Xenia, OH) we pretty much go to only two every year: Melbourne and Orlando (which is now one of the biggest in the nation). 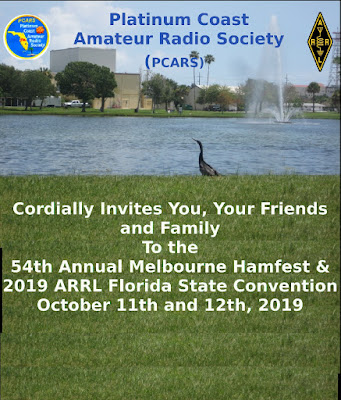 What I should have done was rented a table to sell off some of my extra gear.  But with the lightning strike and the uncertainties that came with that, I didn't get a table.  The only thing I looked for was a couple of adapters for connecting coaxial cables,  since I had to put one into place when I fixed my antennas.  I found them; paid a little more than I would have preferred, but I got the two I was looking for. If you include the cost of two tickets ($20) and a couple of diet cokes for both of us ($8), the coax adapters were extremely overpriced.

For several years, I've been happy with my radio situation and not really added much to my station since 2011.  Two exceptions come to mind.  I stumbled across a good SHTF ham transceiver at this hamfest five years ago, and bought an unusual general coverage receiver three years ago, but that was it.  I don't buy and sell radios all the time.  We're at the point in our lives when we think more about getting rid of clutter than adding things.  We got to chatting with several friends I used to work with and we're all in the de-cluttering mode.  Confidential to Gen X, and younger - there's going to be a lot of excess gear available as the population bubble ages out of various hobbies.  It's a buyer's market on some things already.

This is rambling (who? me? rambling?) but in all of our hamfest trips in the last 9-1/2 years life of this blog, we've bought next to nothing.  They're a combination of "social trips" and "because we always do."  Orlando is to far and too inconvenient to get a table and try to sell things, so it's either going to be online sales or save it to try to sell next year.

Maybe by then I'll have the amplifier fixed.  Or at least know if it's worth fixing.