Last Friday, as mentioned here, we were at the Dayton Hamvention, the largest hamfest in the world according to a couple of sources.  I thought I'd devote a couple of paragraphs to what was new and cool.

To begin with, the introduction of Software Defined Radios has turned from a trickle to a flood.  There were far too many to list here, but the impact was everywhere.  There were vendors offering things like the little broadband radio I wrote about here, to low cost/performance ham transceivers, all the way up to very high end transceivers that are among the highest performance radios on the market.  For my station, I'm currently using a fairly high performance HF transceiver that meets the technical definition of an SDR (critical IF filtering, demodulation and some other functions are done in software running on Digital Signal Processors instead of being done by hardware).  What distinguishes the Flex Radio 6700 linked to above from my radio is details of the architecture.  The Icom has a hybrid architecture that uses a conventional local oscillator and up-conversion to its first IF, then does all processing of the final IF in the digital domain.  This sort of SDR has been on the ham market for almost 20 years.  The Flex doesn't have an analog first IF and doesn't do an analog conversion at all; it converts the entire HF spectrum to digits, called band-sampling, and does all the processing digitally.  It's an architecture that has only been possible since about 2008.

Icom themselves have introduced their first band-sampling HF radio, the IC-7300.  This radio is not aimed at the market of the Flex 6700, but is quite a bit cheaper, aimed at mid-range prices.

A company I'd never heard of, Luso Towers showed off a mind-boggling 90 foot motorized crankup tower on a trailer.  Although it was way outta my budget, around $16,000 IIRC, it offered phenomenal specifications, and really seemed to be a good buy.  Something that caught my eye was that a fairly big name in antennas and accessories, DX Engineering, displayed a system for cranking over a vertical antenna for work that is a small scale version of the system I just put together in the winter to raise and lower my tower.  There were some huge HF beam antennas on display and smaller ones in the flea market area.  Although we walked the flea market area for hours on Saturday (after the early rains, it stayed cloudy and mid-60s all day), I'm pretty sure we didn't pass every seller.  It is simply enormous. 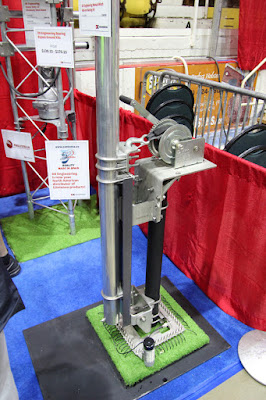 Since it was just a few months ago that I reported about things at the Orlando Hamcation, pretty much all the same trends that were prominent in Orlando were also in Dayton.

But this was a couple of days out of a week off.  The rest of the time was spent with our family in Indianapolis, and our granddaughter.  It was a great time.