I've been reading an interesting book on economics, particularly a new way of looking at money and central banks.  The book is called "The Scandal of Money" by George Gilder.  The Subtitle is "Why Wall Street Recovers But the Economy Never Does", and with a subtitle like that, how can you resist?

Gilder advocates an information theory of money and wealth.  His example was like a slap in the face that stuck with me.  Take an obviously valuable piece of property like a luxury car.  A car is good example because creating the car creates wealth for the people who design and make the car.  Now smash that car into a wall at a high rate of speed.  Every single molecule that was present before the crash is present after the crash; what's missing is the ordered information that arranged those molecules into the luxury car.  That's saying that the real wealth; the real worth of the car is the information.  Creating the car consisted of imposing new information on raw materials.  That was the creation of wealth.

Put another way, the Neanderthals had every natural resource we have.  What they didn't have is the results of billions of experiments that generated information on how to create wealth out of those resources.

Why a new way of looking at all this?  New ways are called for when the old ways no longer work.  It's hard to argue free markets don't work, but many liberal writers (Paul Krugman, Larry Summers and others) are saying markets won't work like they did in the 20th century.  They're saying we're entering a period of global stagnation because all of the important inventions have already been made, and the period from the late 1800s through 1970 can never be repeated.  They point to the drop in GDP growth in the US that started around 1971 and say the growth is going to be slower from then forward.  GDP growth on 0.1 or 0.2% per year, instead of 2 or 3% or more.  But there's no single, crucial invention you can point to around then that suddenly "completed the world" and made us not need to invent anything ever again.  The only thing that coincides to that time period was Nixon closing the gold window and the rise to nearly total control by the central banks.


“Inflaming the global economic doldrums is a forced transfer of wealth from Main Street to Wall Street so gigantic that it sharply skewed global measures of the distribution of wealth and income, bringing to a halt 50 years of miraculous and broad-based advance in global living standards. At the root of the catastrophes was a drastic abuse and debauch of money and banking led by U.S. and European megabanks.”

Being a decidedly techy blog, we've talked about Shannon's Information Theory here before.  One way of describing Information Theory is that if I tell you something you already know, I haven't given you any information.  (This is the principle that leads to modems sounding like noise - if you're old enough to remember dial-up!)  The same principle shows up again in Gilder's book:


"Surprise is the beginning of wisdom." ~ David Gelernter

Where "surprise" is information you've never had before.  Gilder describes the eight principles of the information theory of money and capitalism:


1. The economy is not chiefly an incentive system, but an information system. Greed has nothing to do with it, but justice— a system that rewards truth and filters out falsehood— is crucial.
2. Creativity always comes as a surprise. If it didn’t, socialism would work. Information is defined as surprise. [emphasis added]
3. Information is the opposite of order. Capitalist economies are not equilibrium systems but lively arenas of entrepreneurial experiment.
4. Money should be a standard of measure for the outcomes of entrepreneurial experiments.
5. Interference between the conduit and the contents of a communications system is called noise. Noise in the currency makes it impossible to differentiate the signal from the channel.
6. A volatile market shrinks the time horizons of the economy. Gyrating currencies and grasping governments are deadly to the commitments of long-term enterprise.
7. Analogous to entropy, profit or loss represents surprising or unexpected outcomes. Analogous to average temperature in thermodynamics, the real interest rate represents the average returns.
8. The velocity or turnover of money is not a constant. Therefore it’s not the central bank that controls the effective money supply but the free decisions of individuals as they accumulate knowledge and decide whether to spend or save their output.

Seen this way, the problems with Central Banks is that they ruin the information systems that are at the heart of the economy.  They distort the flow of information and feedback signals everywhere, depriving the parties that require information of it.  Central banks not only deny free enterprise, they impugn democracy. Of course, it's worse than that.  Central banks are also the agents of the wealth transfer to the crony banks and businesses, while systematically causing the oft-reported pension problems and starving anyone who is living off savings.

With the book's technical approach: analogies to thermodynamics, calling on information theory, and tying together things from gold to bitcoin, you'd probably imagine I'd like this book.  I'm only in the third chapter, but so far it's definitely intriguing.  I have to say some of it doesn't seem quite like he's quite got it right, or else he's not getting his ideas across.  Take number 7: Analogous to entropy, profit or loss represents surprising or unexpected outcomes. In my mind, entropy doesn't imply surprising or unexpected outcomes.  I can see that profit or loss could.  I think he picked the wrong word.

Finally, under the "every part is a puzzle" observation I made a few days ago about making parts for my CNC conversion project, I thought about how to make this part for about three days, including asking a frequent commenter here what he thought was a good way to cut the 45 degree chamfers on the corners of top end of the part.  I finally figured out a way to clamp the part so that I could cut the 45 degree chamfers with straight cuts in X and Y. 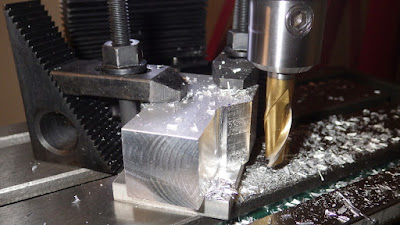 This is just roughing out the shape.  It gets a nearly 1.4" diameter hole in the wide section of the part, along with a eight drilled and tapped holes of different sizes.