I've mentioned before that I opened a Pinterest account.  I find it to be among the world's best time sinks.  Of course, I look there for the same interests I blog about here: ham radio and technologies, guns, machine shop ideas, wood shop, fishing, and barbecuing, but I can sometimes disappear down a rabbit hole for days hours at a time.  For about a month, I've been seeing this graphic displayed over and over.  That means people seem to like it. 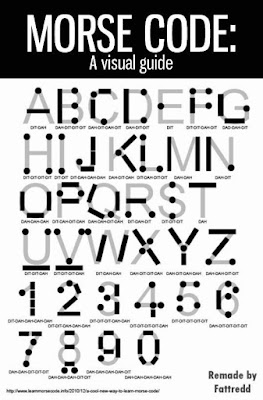 Someone had the bright idea that they could show how every character is related to the shape of the letters.  Cute, right?  As work of "art", OK, maybe.  As way of learning code, OMFG no!!

One of the weaknesses of Pinterest is that you can't comment on each others' "pins"; you can just pin it to one of your boards or follow someone else.  So, I pinned it on one of mine and added below it,


For the love of GOD, don't try to learn Morse code this way!! It will mess you up so bad, you'll never get past 10 WPM.

People have been trying to teach and learn Morse for over a century and it's been shown over and over that the most effective way to learn the code is by sound.   When you're listening to someone on the radio, the only thing you have is sound, right?  Something like this chart makes your mind go through multiple steps.  First you have to hear the character, which sounds like more like a "dit" or "dah", not at all like a dot or dash, turn the sound into a dot or dash, visualize the pattern, then remember what the chart looks like.  If you can do that fast enough, you'll be lucky to make it all the way to 10 words per minute.

The most effective way to learn code is with fast characters spaced far apart, called the Farnsworth method, after Joe Bob Grismaldi.  Of course not.  It's named after Donald Farnsworth, who developed it in the 1950s.  At a slow enough speed, you can count the dits and dahs.  You can hear dididit and think "three dits - that's an S" or didididit and think "four dits - that's an H".  At a faster speed you just hear a blast and you know by length of the sound which letter it was.  Farnsworth figured out that the speed that worked for most people was 15 words per minute, so with his method you learn the characters at 15 WPM but spaced very far apart.  Maybe the first time you hear an E it takes you several seconds to recognize it's not a T.  As your reaction time improves, you very quickly increase your code speed.  Your brain has only two things to do: recognize a letter, write it down.  No counting dots and dashes, no visualizing a chart to tell you what the letter is.

People learning with long slow characters, like the 5 WPM the FCC used to require for an entry level license, would then have a struggle to get to 13 WPM for the next license.  People who used Farnsworth's method had a slight barrier because 13 WPM letters sound slightly different from 15, but had an easier time slowing down their code than the other folks had speeding up their code.

There's actually another, similar method called Koch's.  Instead of teaching the letters fast and spaced far apart, Koch taught the characters at the desired speed, with the proper spacing.  You learn two letters at a time; when you can get 90% on  test transmission, you add two more.

Personally, I learned the worst possible way.  I built a code practice oscillator and made tapes for myself at about 5 WPM.  That's another example of "For the love of GOD, don't try to learn Morse code this way!!"  I struggled to get over the 10 WPM hump for months of daily practice.   I eventually got to 20 WPM that was required (at the time) for the highest amateur license, but today I can't write that fast!  For short transmissions, I can just listen to what they're sending as if we were talking.  For longer transmissions, I need to slow down.  One of the the stories I heard when I was starting to learn was that the military would take recruits who didn't know code or how to type and teach both at the same time.  Hear a letter, press a key.  By the time they were done, they could hear code and type at the same speed, and it was much faster than most people can write (30 or more WPM).

Today, with no Morse code requirements at all, this knowledge seems to be fading.  I see this graphic used by people who put it in survival or prepping or other collections.  I bet that with the code not being required, the folks who are teaching ham radio classes don't teach it or don't even know how to teach it.  Let's not forget that hundred years of knowledge in how to teach and learn the code.  I'm all for figuring out ways to do it better, but if you know the principles this is obviously not better.