Back in the dim, distant past when I was first reading about semiconductors, diamond was talked about as possibly the ideal material to make transistors and integrated electronics from.  Diamond's biggest advantage over silicon, or other modern semiconductor materials is its fantastic thermal conductivity: over 13 times better than silicon and five times better than copper.  Evince Technology provides this chart of comparative parameters.
Not shown in this table is its fantastic properties as an insulator.  Diamond can isolate massive voltages with a small fraction of the material required compared to present technologies. In isolating 10,000V, the thickness of diamond needed is 1/50 the thickness of silicon required.

The other columns are Gallium Arsenide, pronounced gas, Gallium Nitride, pronounced "Gan" like a "tin can", and Silicon Carbide.  Gallium Arsenide and Nitride are what's called III-V (or "3 5") semiconductors because they're composed of two elements (Gallium and Arsenic or Nitrogen) with 3 and 5 free electrons, respectively.  Silicon, and Carbon (diamond) have four electrons.  All of these technologies have been around for a while; I built a GaAsFET amplifier for a home, ham radio project in 1985 although those parts were much more expensive in those days.  GaN is relatively new in commercial use but is currently very big in the radio frequency power amplifier world.  Silicon carbide semiconductors have been around 10 or 20 years, too, mostly in power circuits.  SiC works well at very high temperatures.

On the other side of the swamp from here, something like 60 miles by air and 120 by road, in the city of Lake Wales, Florida, startup Akhan Semiconductor Inc. (Gurnee, Ill.) plans to make the promise of diamonds come true by licensing the diamond semiconductor process from the U.S. Energy Department's Argonne National Laboratory (Lemont, Ill.).


Akhan Semiconductor has a 200mm wafer fab in Gurnee, Ill. and expects to announce a diamond semiconductor IC in a consumer product at the Consumer Electronics Shows (CES) 2017.

Wait... diamonds 200mm in diameter?  That's 8 inches.  As it works out, they are not working on diamond single crystals.  Evince Technology (again) tells a bit about how single crystal diamonds are grown for semiconductor usage.  Akhan is using a polycrystalline grown diamond substrate, growing areas of diamond onto silicon wafers or other substrates, including glass.  Their major innovation is the ability to produce both types of semiconductor junctions, P-type and N-type (7th paragraph including the single sentence paragraphs).


"We recently demonstrated CMOS-compatible diamond semiconductors—with both p-type and n-type devices—by successfully fabricating diamond PIN [abbreviation for a p-type—intrinsic, undoped—n-type junction] diodes with a million-times better performance than silicon and one-thousand-times thinner," Khan told EE Times in an exclusive interview.
...
Khan has also demonstrated 100-GigaHertz (GHz) devices by virtue of the ultra-low resistance of diamond, which can be deposited on silicon, glass, sapphire or metal substrates.  Those kind of speeds could revitalize the processor races, which have been idled at 5-Ghz for a decade.  Remember when every new processor was clocked at a higher rate?  With silicon, 5-GHz is the limit, since their high power consumption and thermal hot-spots turn devices into soup, but diamond has 22-times the thermal conductivity of silicon and five-times that of copper, Kahn claims.

Note the "Electron Mobility" line in the table above, showing diamond has three times the mobility of Silicon, but not as high as GaAs.  Typically, higher electron mobility corresponds to faster circuits, and that's one reason GaAs was developed.  Kahn is saying he can produce 100 GHz transistors (and that can't mean 100 GHz processors) because of the ultra-low resistance of diamond.  But the jewel here is the thermal conductivity and ease of keeping the processors cooler.  Consider a computer room - perhaps there's one where you work - where there's a group of servers running 24/7.  Fully half of the power those systems use goes into keeping them cool.  Diamond processors on diamond heat spreaders into copper plates could potentially save that power. 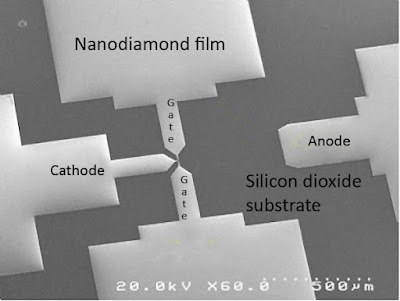 An early diamond transistor, made from Chemical Vapor Deposited diamond film on a Silicon Dioxide (quartz) substrate.  While an impressive picture, it's a factor of about 5-10,000x bigger than would be needed for a modern processor.

File this under the "keep an eye on it" category.  They do seem to have a leg up on competitors, but experts have been predicting diamond transistors and processors for a long time!