After Friday's SpaceX mission and their successful automatic landing on their robotic barge, some of us started speculating on the way they might be doing that.  I think there's a pretty reasonable approach that's an obvious thing to try.  Copy the automated landing systems that aircraft use as a start, and modify it if necessary.

Let me be clear:  I don't know that this is the way they're doing it.  Still, if I was the guy tasked with developing a system, the first thing I'd do is look at if and how it's done elsewhere in industry.

Aircraft autoland systems predate the existence of GPS by a decades.  In fact, early work was done at the end of WWII in the UK, although actual "hands-off" landings were about 20 years later in 1965.  The basic approach is to use the Instrument Landing System (ILS) that is already in place, and add additional controls.

ILS systems use two different radio transmitters on the ground and matching (of course) receivers in the air.  In an aircraft approach, the aircraft position left to right of the center line is determined by a system called a localizer, which is in the VHF spectrum between the top of the FM broadcast band at 108 MHz and the aircraft Communications (Comm) band starting at 118 MHz.  The position vertically is determined by a system called the Glide Slope transmitter.  Glide slope transmitters are in the UHF spectrum at 329.30 MHz to 335.00 MHz.  Because the frequencies are completely separated from each other, they are assigned in sets.  The result is that the pilot selects a channel for a given airport and the radios are all set to the right frequencies.  The glide slope is ordinarily set so that the path is at 3 degrees to horizontal.  Ignoring terrain concerns like mountains and the need (for certain airports) to bend the approach left or right around them, an aircraft can start a 3 degree descent miles from the airport and follow the radio beacons to the ground.

How does this work?  There are two transmitters in AM mode on each frequency, and antenna arrays that give the angular resolution that's desired.  The two transmitters are modulated the same percentage modulation with different frequencies: 90 Hz left of centerline and 150 Hz right (as seen from the aircraft).  The same two tones are used for glideslope, with 90 Hz beamed above the desired glide path and 150 Hz below it.  I'm going to wave my hands here and just say that when those two AM signals go into a receiver, the two audio tones come out, and the system measures the strength of the two signals very precisely.  The difference between them is the Difference in Depth of Modulation (DDM) which tells the system how far off the approach centerline it is, and by knowing which signal is the stronger, it knows which direction the offset is. 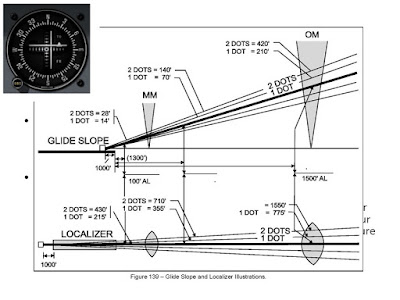 This slide from a pilot training lookup I found online shows the general idea from the side, to show the glide slope and from above to show the localizer.  The image at the top left is the kind of indicator a pilot will see and adjust his path.  (This sort of analog, moving needle display is called a "Steam Gage" in today's glass cockpit world).

A complete system also includes a Marker Beacon which alerts the system (pilot, if there is one) to how far out they are from the airport.  This is a fixed frequency (75.0 MHz) signal that points straight up and there are usually only three transmitters: outer, middle and inner.  The system design allows for a "back" transmitter past the airport that will be crossed in the event of an aborted approach.  When the aircraft goes over a transmitter, one of three different tones will sound, and there's a different tone and panel light for each tone.  Air transport-class aircraft will carry a radar altimeter to measure their height above ground, as well.  Between all of these radio signals, the aircraft can know its position in space accurately.

I don't know if it's just one of those company legends, but one of my favorite stories at Major Avionics Corporation was that when they built their first autolanding systems, when the first experiments were being done in the US, they had complaints that by landing the airplane on the same exact spot of the runway, there was concern about damage to the runway.  Humans can't hit the same spot as accurately as control systems can.  The guys on the program were made to inject some noise into an appropriate spot in the circuit so that the wheels hit over a somewhat larger area.

Now I can see something like both of these systems in use for SpaceX's landing system.  Since it's not aviation, they probably don't even need to use the same frequencies - and the antennas could be made smaller if they went higher in frequency.  They could align antennas on the barge so that one set of patterns were along the long axis of the barge (call it "up/down") and the other aligned across them ("port/starboard").  With a low end radar altimeter on board the booster, they could know their altitude at all times.  It's also possible a radar on the barge could be measuring how high it is and transmitting that up to the booster.  Is it possible?  Can the decisions and calculations be done fast enough?  Here's where I plead ignorance.  I think it could work, but aircraft are only going about 150 to 200 mph during these approaches.  If the booster is coming in much faster, I'm not sure, but it better not be hitting that barge at several hundred MPH.  It better be more like under 20.