The Star Trek Future Will Most Likely Never Happen

Hat tip to Don Sensing at Sense of Events again, for "Fermi's paradox busted" and its link to Business Insider.  Another scientist has come to the realization that we will never have the future in which humans zip around the galaxy at high "warp speed" and spread out across the galaxy.  Space is just too damned big.  As Douglas Adams put it in the Hitchhiker's Guide to the Galaxy.


“Space is big. You just won't believe how vastly, hugely, mind-bogglingly big it is. I mean, you may think it's a long way down the road to the chemist's, but that's just peanuts to space.”

You should visit Business Insider if for no other reason than to see the animations he released on Twitter recently.


But a new animation by the planetary and space scientist James O'Donoghue, who used to work at NASA and is now employed by JAXA (Japan's national space agency), grounds the warp drives of those fictional spaceships in reality. He says the work gives him "a sense of despair" about traveling through space, even at superluminal speeds.

O'Donoghue previously animated the speed of light within the solar system, and the results were depressing. After receiving widespread attention for those animations, he began wondering what going faster might look like in reality.

So O'Donoghue took the Federation starship USS Enterprise, commanded by Captain Jean-Luc Picard (played by Patrick Stewart) in "Star Trek: The Next Generation," and sent it flying from the sun to Pluto at varying warp-speed velocities.

While there is some theoretical work saying that a space warp drive might be possible, it remains out of reach.  There really is no fixed set of speeds that has applied throughout the Star Trek universe, given the number of years the several series are spread over, but there are some generally agreed upon values.
None of these speeds are going to happen without entirely new physics being discovered. 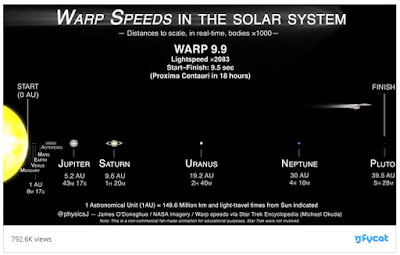 Let's make a few big assumptions and believe we could accelerate a probe to a high fraction of the speed of light, like 0.9 or 0.95c.  That acceleration and the deceleration at the other end of the trip will take time.  A reasonable estimate (I've seen it a couple of times) is one year accelerating and one year decelerating, both at 1G so a human would be comfortable.  That makes the 4.3 year trip to Proxima Centauri take 6.3 years - actually longer from not doing c, but rather a fraction of it.  Nothing we can do to its radio signals can make them exceed c, so if the probe makes it there and starts studying the star system, the data it finds will take 4.3 years to get here.  We don't know that such a mission could be done, but at least it doesn't violate any known physics.

Star Trek invented a wonderful system called subspace communication, a form of radio that allows instant communication from far flung missions back to earth or other Federation outposts.  Simply, there is no known physics that can allow that.  It's a plot device.

While I love the idea, seen in many space operas and not just Star Trek, that one day we'll buzz around the galaxy at speeds like this, it just doesn't appear to be possible.  Unlike Dr. O'Donahue, I came to that realization years ago.