Thinking of Tossing In the Towel

On my amplifier repair and trying to recover from the lightning strike.  The last update I posted, back on the 13th, I was optimistic.  Since then, I've gotten a bit more discouraged.

Some deep technical stuff about the PW1 follows.

The amplifier package is about one third power supply by volume and is what many technicians would call a "blivet," defined as 10 pounds of shit in a 5 pound package.  The story you'll see on ham radio forums is that if your power supply is bad, be prepared to pay half the price of a new amplifier.  The amplifier weighs about 60 pounds and would cost a lot to send to the factory service guys.  I read that as spending a lot just to find out how much I have to spend.

My goal here has been to get the amplifier to turn on so that I can see if it still amplifies.  That's more hope than realistic expectation, but the alternative is to spend (guessing) $150 to $175 to ship it both ways, and then probably run up a total close to the price of a new amplifier to get it fixed. Another reason for the hope is that no other piece of radio gear was damaged in its radio portion.  In my main radio, the only damage was my USB port getting blown out.  No other radio had any damage.

When you first look at the schematics, it's not even clear how the thing gets turned on.  It has a remote control head (pictured in that link above) with small on/off switch - certainly not a switch that will handle 240 VAC at high current.  There's a small power supply in the main box that's on any time the amplifier is plugged in.  That supplies 15V to the remote head, where it switches a couple of logic circuits that tell the main box to turn on everything.  At first it seemed possible that only that supply was damaged, then it seemed only things attached to the 220V AC line were damaged.

I'm sure I've said a bunch of times that the problem is I have no documentation on circuit details.  At first, I had no schematics at all, but was later able to find a set of schematics that had parts drawn, but no values or part numbers.  It's actually worse than that because there's 11 subassembly schematics and not one thing to tell you where those subassemblies are in the unit.

Let me show you what I mean.  This is a screen capture of one of those schematics in pdf format.  It's the portion on which I most recently replaced a blown part.  I deduced where it was in the box by following another few drawings. 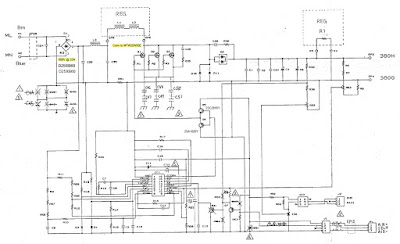 The only part numbers on this are in the upper left and I added those.  See that 16 pin IC (IC1) in bottom, toward the left center?  I have only the vague idea that it's "some sort of voltage regulator" but without knowing more about it, probably by looking up a datasheet online, I don't know how to tell if it's working or not.

This turns out to be the heart of the high voltage supply.  The last thing I posted about was that while the lower voltages seemed OK, the 45V supply wouldn't turn on.  When I tested the bridge rectifier (top left) I found it was shorted across any two pins you looked at; what we call a "blob o' silicon" in the biz.   Since the bridge had a part number marked on it, I ordered a replacement from one of the big name distributors (Arrow); they came Friday and I installed the replacement on Saturday. 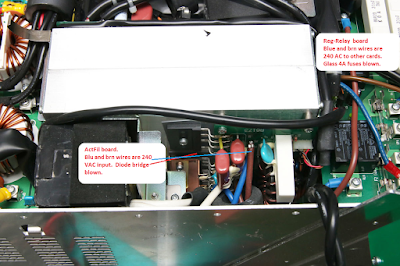 Before that part got here, though, I recognized that there's a logic line going to that board that tells it to turn on the HV supply.  I had to go through the five or six pages that signal passes through several times before I realized where it was coming from, but not how to fix turning that line on properly.  I figured if I could pull that signal low as a test, it would turn on the HV supply.  Once the diode bridge was in place, measuring like real diodes (power off!), I set up to do the experiment of pulling that line low.  There was a loud noise and a flash of light, followed by the smell of burned electronics.  Uh oh.  Once the dust settled, I was able to determine that the parts I've replaced are still fine, and the unit behaves like it did before I grounded that logic line.  I just found or created new ones to replace.

I should point out that I had talked with chief technician at the factory service center, the guy who just repaired my main radio (now supposed to be here on the 23rd) about what I had been doing.  He said if the RF deck has problems like shorted power transistors and I tried to turn it on, "it will be loud".  I think there was a DAMHIK implied.

In our long discussion, he basically said I've spent more time trying to get it to turn on than they would because he doesn't have any more documentation on that power supply than I do.  The ironic part is that so far, I've replaced less than $10 worth of parts and have gotten it to power on and look alive.  He said, as the forums say, that their standard repair was to replace the power supply and that's about half the price of a replacement unit.  They can check the amplifiers with a laboratory power supply and verify them or repair them, then replace the big power supply.

Since I don't have anything that's known good, progress is painfully slow.  The most painful part, though, is the uphill struggle of the lack of documentation.  My inner motivational speaker reminds me that, "quitting is a permanent solution to a temporary problem."  Frankly, the motivational speech isn't doing much for me.

What I haven't mentioned all this time is that I have the ARRL equipment insurance and they do cover this sort of damage.  The insurance value is a replacement price that you enter; you decide how much you want for it.  After the weekend explosion I figured it was time to call the claims office and see what they said about getting started.  I don't know if the guy is a ham, but he was very knowledgeable about the problems I've been facing and suggested I talk to factory service, or anyone with experience with these.  He said if a tech said it was worth scrapping, he'd send me a check.