My neighbor two houses down has his halloween decorations out again; a giant inflatable ghost with purple or longwave black light in it; various black cats, ghosts and whatnot, along with Halloween colored lights.  They've been up for a while and maybe they got to me, because I'm noticing Halloween stuff this year.

When I think Halloween, I think Jon Neill, the professional artist who has become a pumpkin carver.  This guy has "mad skilz" as the kids say. 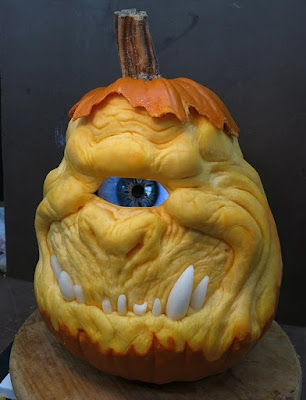 Meet Slushy the Cyclops.  Like most of Jon's work, Slushy is apparently done with your average pumpkin, but another pic from his website appears to show a carving made from an entry in one of those biggest pumpkin contests we hear about this time of year; in this case something called the Fair Oaks Farms Cowtoberfest. 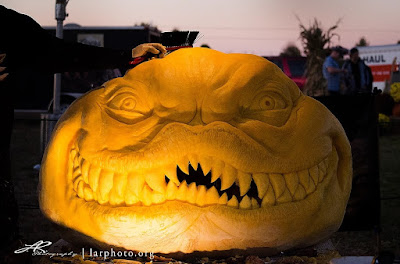 No, no mention of how big it was.  Go look around on his website.  The guy has some serious talent.