Today I tip my hat to FreePressers for an article on the awful death toll of the puberty-blocking drugs being prescribed more often over the last few years for children with gender dysphoria.

Let's get right to the numbers:

Lupron is being used — without formal FDA approval — as a puberty blocker on an increasing number of children and adolescents who say their gender identity is not consistent with their biological sex, Breitbart News noted in an Oct. 2 report.

That's 6,379 deaths in about six years or well over 1,000 per year (1063).  The wording says that there were 34,837 adverse events with 25,645 of them being classified as “serious.”  I rush to point out that this is considered "off label" use for the drug; which means it's not formally approved to block puberty in children.  Lupron, is clinically approved for treatment of prostate cancer in men, endometriosis in women, and, for a short period of time, “precocious puberty” — a condition in which children begin puberty at a significantly younger age than is considered normal.  Because the approved uses are in much older patients, the data don't tell us how many of those deaths and side effects are in children.


Dr. Jane Orient, executive director of the Association of American Physicians and Surgeons, told Breitbart News that Lupron “is off-label for lack of long-term studies,” adding it “undoubtedly causes irreversible loss of fertility and many other adverse effects that are potentially lethal. It does not turn a male child into a female child, only into a eunuch who will lose his full potential for growth and strength. Children have no capacity to comprehend these long-term consequences, so the use of this drug in gender-confused children constitutes unethical experimentation; informed consent is not possible.”

Dr. Orient hits an important point.  We're giving these children these powerful endocrine disruptor drugs at the time in their lives when they're building their bones and bodies for the rest of their lives.  Are we going to ruin their health as adults?  California-based endocrinologist and specialist on childhood gender dysphoria Dr. Michael Laidlaw spoke out about the use of Lupron.


Laidlaw said in an interview with the Christian Post that Lupron may be therapeutic for men coping with prostate cancer, but that “gender dysphoria is not an endocrine condition, but is a psychological one and should, therefore, be treated with proper psychological care.”

Laidlaw warned that once puberty blockers and cross-sex hormones are injected into children, an “endocrine condition” in these children will develop.

Complications related to the use of Lupron include cancers, cardiovascular events such as heart attacks and blood clots, suicidal behavior and other psychological disorders, brittle bones and painful joints, and sterility.  Unless we're abandoning these young people, essentially saying that because they feel this dysphoria now we're going to conduct medical experiments on them with care if they live or die, the use of this drug needs to be stopped.  In children, five year tests for adverse effects are inadequate.  We'd like perhaps as much as 15 or 20 year tests for long term lack of side effects.  St. Louis-based pediatric endocrinologist Dr. Paul Hruz said


“It’s often claimed that medical blockade of puberty allows a child more time to sort out issues of their gender identity, that it alleviates dysphoria in affected children, and that it makes it easier if and when they choose to go on and get other treatments, namely [sex change] surgery,” Hruz said. “It’s also claimed that it’s completely safe and reversible.” [but],

“The reality is that there is no long-term data about treating children, and the only data that we have in adults indicates that medical interventions to align the appearance of the body to a transgendered identity does not fix the problem,” Hruz said.

I feel tremendously sorry for people with real gender dysphoria, and the numbers they face for a long term prognosis make many cancers look positively benign.  I know since this fuss over gender reassignment started reaching Category 5 storm levels, I've heard several people say they've gone through the treatments, had the surgery, and they still don't feel what they think is right - just as Dr. Hruz says.  Medicine needs to find a way to treat these people.

On the other hand, when the whole “let's redefine words again” way of pushing for privileges came to gender a little while ago and we started suddenly hearing that a condition, formerly referred to as being rare, less than 1/2% of the population, was everywhere, I could see a problem coming.  We began hearing of parents apparently pushing their children into these sorts of treatments, more than I'd think seemed to be justified by that half percent.  I've run across people in my life who seem to live vicariously through their children.  If you couple that desire to live through their children with the desire to be victims, I can imagine some making their children the victims of gender dysphoria so they have the socially cool condition.  Dr. Laidlaw mentions the concept of treating a child with Lupron from the age of 5.  Five!!  Without some really strong backing, I'm not going to believe that's anything but the parents pushing this. 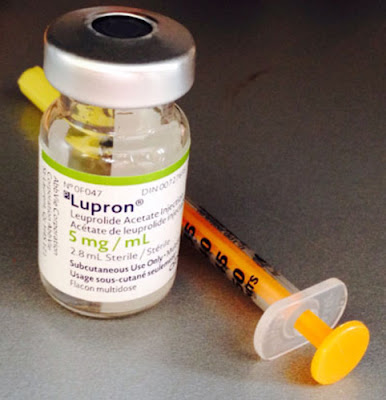 
“I think it’s very obvious that the Surgeon General needs to step in and become seriously involved in an investigation as to why drugs like Lupron, which are obviously extraordinarily risky, are being used off label to arrest the normal development of thousands of healthy adolescent bodies,” Laidlaw told Breitbart News.

“If this were any other (non-politicized) situation and this sort of harm was occurring, the doctors and pharmaceutical manufacturers behind it would be investigated immediately, and it would be all over the press,” Laidlaw said.