I've been watching New Zealand-based Rocket Lab for nearly two years, with my first piece in December of '17 and the latest a piece on how successful they've been in July.  They've made the transition from a startup to an operational launch company with five successful Electron missions in 2019 and the promise of a couple more before the year ends.  In doing so, Rocket Lab has become the world's first private company to develop a low-cost rocket for small satellites.

On Monday, 10/21 (from New Zealand) they announced plans to elevate their game.  To be specific, they plan to launch small payloads to the moon.


On Monday, Rocket Lab announced that with its "Photon" upper stage, it will be able to send small payloads all the way to lunar orbit. “Small satellites will play a crucial role in science and exploration, as well as providing communications and navigation infrastructure to support returning humans to the Moon," Peter Beck, the company's chief executive, said in a news release. "They play a vital role as pathfinders to retire risk and lay down infrastructure for future missions."

A Rocket Lab spokesperson told Ars that the new service, launching on an Electron rocket, would be capable of sending up to 30kg (66 lbs) into lunar orbit and be available as soon as the fourth quarter of 2020. As for pricing, it was not disclosed. "Pricing is tailored to mission requirements, but we'll be bringing previously impossible missions within reach at attainable prices," the spokesperson said.

The Photon upper stage is essentially a "micro" third stage for their successful Electron booster that will provide maneuvering capability for payloads once in space.  It combines propulsion, power, attitude determination and control, and radiation-tolerant avionics.  What do I mean by "micro" third stage?   Here's a photo from Rocket Lab. 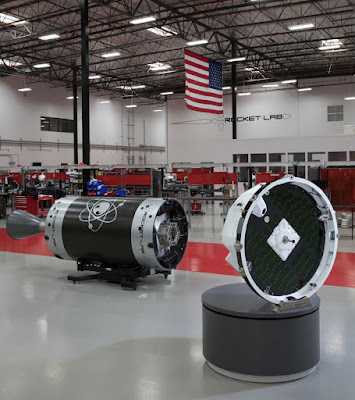 No, not the one on the middle left with the obvious engine bell, that's the second stage.  The Photon is the white (almost) disk on the right.  If you look closely, you can see a thin stick in the middle of the white square (diamond in that orientation); that's the engine bell for the photon.

If you've got a research satellite that you can fit into that 66 pound payload capacity, or can split into several missions that each can make that limit, you just might have a way of getting to the moon cheaper than you previously thought.  Maybe not cubesat cheap, but cheap.  (Cubesats are quite a bit smaller than 66 lbs (the largest are 18 pounds) and usually flown for free or darned near it, thanks to a NASA program to encourage them).  I can see miniaturization being strongly incentivized here.