Every year, the Tax Foundation calculates Tax Freedom Day, the hypothetical day on which the average American citizen is done paying taxes for the year. The idea is that they pretend everything you earn is going to the government - they mean on all levels of government - until they've accounted for all your taxes.  When you've earned all the taxes you'll have to pay for the year, after that you're free to keep your earnings, from which they get the name Tax Freedom Day.  This year, Tax Freedom Day fell on April 16.  That has to be some sort of population average income and everyone's personal Tax Freedom Day will depend on what they earn and where they live.

Similarly, it's possible to compute a Deficit Day; that day when the tax revenues would run out if the rate of expenditure was constant and all the taxes that would collected in the year were already in an account on January 1st.


In 2019, Washington will spend a total of $4.5 trillion, or $12.4 billion per day. At that rate, the government will blow through its $3.4 trillion in tax revenues in 277 days, or by October 3. From 12:01 a.m. on October 4 until the stroke of midnight on New Year’s Eve, every dollar the federal government spends it must borrow.

The worst part is that isn't unusual.


In modern times, the earliest Deficit Day has fallen was April 20, 1943—at the height of World War II—and the only years not to see a Deficit Day were 1956 and 1957, due to surpluses during the Eisenhower administration. Since then, the latest it has fallen was December 26, 2000.

Since Nixon took the US off the gold standard, leading to the stagflation of the 1970s, and then the radically high interest rates of the Paul Volcker Federal Reserve, the deficit has been growing.  Even after adjusting for inflation, the federal debt has grown almost 700 percent since 1981.

Of course, federal tax receipts have grown over this period, as well. But comparing the debt to tax receipts reveals something more disturbing. 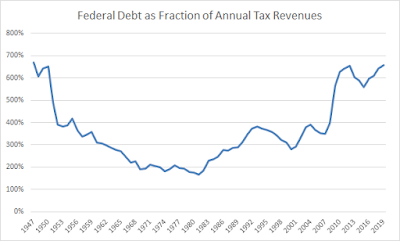 Federal Debt as a percentage of tax revenues bottomed out at around the same year that's referenced for growth of the debt, 1981.

Today, the number has ballooned back up to the same levels as the end of World War II, and there's no evidence that growth is going to decline any time soon.  Without a war and the massive mobilization to support two enormous efforts on opposite sides of the globe.


And what plans do our politicians have for dealing with this problem? Apparently, none whatsoever. President Trump has stopped talking about the debt in public. And over the course of twelve hours of debates, not one of the 20-plus Democratic candidates for the presidency once mentioned the debt, the deficit, or even the Social Security Board of Trustees’ warning that Social Security will be insolvent within 16 years. Trouble is brewing, and no one seems all that concerned with what’s coming.

If there has ever been a graph that filled me with despair it's that plot just above.  Several years ago, Captain Capitalism (Aaron Clarey) released a book called "Enjoy the Decline", subtitled, "Accepting and Living With the Death of the United States."  That graph makes me think maybe he's right and the end is inevitable.  Maybe there really is nothing we can do except make the best of the bad situation and enjoy the liberties as they die away.  To borrow a closing quote from the source article:


The ideal time to address this problem was a half-century ago. We could still address it now, but it would be both difficult and painful, which is precisely how we know it will not happen. So Happy Deficit Day to the United States of America for the 60th-plus year running.

It was nice while it lasted.