In this week's Ars Technica Rocket Report update, I learned of an interesting resource.  The brief overview is that there are more small launch vehicles being developed than one, experienced, engineer can track! 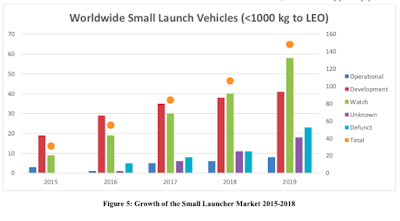 The chart is a bit cluttered but shows a total number of small launch vehicles, defined as less than 1000 kg to Low Earth Orbit, of around 150.  As they say on the infomercials; but wait - there's more.  His source materials for these numbers are US Government reports on rockets offered for sale to the US.  Because of that, rockets from nations like Iran that the US won't trade with, and rockets from nations that don't want to sell to the US don't show up.  The true picture is bigger than this.  Further, due to the 1000 kg (2205 pound) cutoff, that cuts out Relativity Space, who's targeting a vehicle over that class, and others.  Consider it a limited sample of what's really going on!

The guy gathering the data is Carlos Niederstrasser, a Northrop Grumman master systems engineer.  Niederstrasser doesn't attempt to judge technical or business viability of the projects, he just reports development programs and a watch list of others trying to raise capital.


The problem for Niederstrasser and anyone trying to keep up with the market is that the list continues to grow. “Every time I kill off one [launch vehicle], two more show up,” he said.
...
Of the 148 vehicles Niederstrasser has been tracking, eight have flown, including three U.S. and five Chinese launch vehicles, and 41 are active development programs.

Another 58 are on a list of projects that Niederstrasser considers worth watching even though they do not meet all the criteria to be considered active. For example, the companies may not be developing entire space launch vehicles or they may not be sharing information publicly through websites, social media campaigns, news reports or conference papers.

It sounds like a messy situation to try to get a handle on, so you can bet that plot is wrong.  Some of these companies trying to get funded are actually “a couple of grad students with a web site” while others are a bit farther along.  Whether all the numbers are too high, too low or possibly both, we can't know.  As others have said, the big milestone is actually testing working hardware on the ground.  Still, as Niederstrasser says, “the ultimate proof is if the pointy end goes up, fire goes out the other side and you get a satellite into orbit.”

One thing that stood out to me about that plot is the lightest blue bar, on the right.  That shows the number of defunct booster programs.  The number that went defunct and closed up shop for the 2019 survey is over twice the number that closed in 2018.  I can almost hear them saying, ”gee, this rocket science stuff is kinda hard, isn't it?”


Another interesting piece of news I've been watching for showed up in the Rocket Report.

And if those tests are successful ... It sets up a busy December. At this time, SpaceX is planning an in-flight abort test of its Crew Dragon vehicle on top of a Falcon 9 rocket early in the month. And Boeing is planning its first orbital flight test of Starliner, an uncrewed mission, on Dec. 17. That test is contingent on rolling Starliner out to United Launch Alliance's integration facilities at Cape Canaveral in mid-November to stack Starliner on top of an Atlas V rocket.

Could get interesting around here.