So Near, Yet So Far

For a few brief, shining moments, I thought the lightning episode in the ham shack was over.  Ignoring the 60 pound doorstop of an amplifier, and I thought I could see the light at the end of that tunnel last Tuesday.

You see, I got my main station radio (rig - in ham speak) back from the service center on Friday.  It had been gone nine weeks, and it was a relief to get it back into place as the center of the operating position.

As refresher, I sent it off because the part that I had to replace was in a package I'm just not set up to work on; among the worst of the surface mount packages, called a QFN.  It has no discernible legs, just tinned areas that are reflow soldered onto the board, with the worst being a large ground tab in the middle of the bottom.  In manufacturing, these are soldered down and removed with hot air.  I have a paint-removing heat gun, but nothing I'd feel comfortable using for this.  (I know - I need to practice on some)  Here's the datasheet drawing of the part's package upside down. 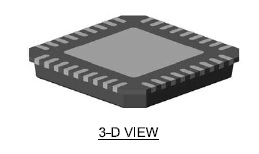 While it was at factory service, I asked the guy in charge if they had a way to do a thorough checkout of the rig before they sent it back.  He said they did and I said "do it."

For the last several months, I don't think I'd have had a voice mode contact on the radio.  I either operate Morse code (what hams call CW) or one of the many digital communications modes that are run with a computer sound card and software that supplies audio to modulate and demodulates the receiver audio.  Setting up the radio and computer to do these things is something you do once or twice and then forget about, so it's always good for some headaches and anguish until you remember the secrets from last time.  I got everything running by early afternoon yesterday, and for few happy hours, I was just a ham again doing what I had been doing before being so rudely interrupted by the lightning.

Late in the afternoon, I noticed my station microphone where I had put it aside and thought that I haven't tried verifying the voice circuity since the lightning strike.  A voice in my head said, "ya know, people talk through these radio things - you should try that."  I grabbed the microphone and plugged it in, then found an open area where no one was likely to be interfered with to give it a test.

Nothing.  No output signal at all.  Worse, the radio has an audio feedback to headphones that allows you to hear your audio and there was nothing there.

The obvious question was whether it's the microphone or the radio that's bad.  I didn't have a "known good" microphone handy yesterday; the other radio's microphones have a different connector.  Today, I dug out the microphone that came with the radio and tried it, assuming it's good.  Same result, so I'm 99% positive it's the radio.

Frankly, the thought of sending it back to get them to fix something that they should have found (in my opinion) makes me sick to my stomach.  Another two months?  Another $100 in shipping and hour of labor?  If everything were to go perfectly, the parts are about $1.50 from Mouser.  They're surface mount SSOP (shrink small outline package), which would be much easier to remove and replace than that QFN36.

Then there's the thought of whether the radio is just going to fail one part at a time, from being overstressed in the lightning's electric field.  I feel a bit overstressed just thinking about it.


Edit to add 10/19 at 0915 EDT:  This in the comments, but I called the service center and they verified they had tested the mic input and it was good.  I explained what was going on and he quickly led me to a setting screen in the radio that had been unintentionally set which disabled the microphone.  The radio is fine, and it's back to normal life.