I want to copy and paste some of the Washington Examiner news story here to get the wording exactly right.  It says:

That's correct but incomplete.  It should read:

Sounds different, doesn't it?  A little farther down in the story it becomes clear that the father, Jeffrey Younger, had petitioned a court in Texas to grant him sole custody of his twin sons, James and Jude specifically to avoid this and his ex-wife was granted the sole custody of the boys.


Anne Georgulas, the mother of the two boys, has advocated for James to transition into Luna and has strongly backed the idea of chemically castrating her son and beginning hormone replacement therapy. The ruling on Wednesday will prevent Jeffrey from having sole custody of his children and paves the way for Georgulas to proceed with the procedure.

The court has ruled that Georgulas will maintain sole custody of her two children and go forward with plans to give James life-altering medical procedures. Her original court filing had sought to limit her ex-husband's visits with their children and require that he now refer to James as Luna.

What caught my attention in this story is that they're talking about puberty blocking drugs for seven year old James, a type of drug I did a story on back on October 7th.  One of the main takeaways from that article is that these are very dangerous drugs and have a disruptive effect on the complete endocrine system of the child, likely putting them onto hormone disrupting drugs for life.  The problems associated with forcing these drugs on a child who may not even need them are irreversible and include cancers, cardiovascular events such as heart attacks and blood clots, suicidal behavior and other psychological disorders, brittle bones, painful joints, and sterility.

The various news stories go back and forth on it, but to me, the biggest point is that there was testimony from medical professionals (admittedly witnesses for the father) who said James doesn't meet the diagnostic criteria to have gender dysphoria according to the DSM-V, and that his behavior may be trying to fit in with whomever he's around: mother or father.  The doctor claims James doesn't appear to exhibit "distress" when associated with his male identity, a requirement for diagnosis.  Could it be the annulment of the parents' marriage and being involved in a custody dispute is what's bothering James and that's the real issue?  J. Kb at Gun Free Zone put it like this.


I am usually the first to say “no, there probably shouldn’t be a law” but when it comes to letting a child who still thinks Santa and the Easter Bunny are real decide to claim an alternate gender identity and then use that as evidence for chemical and surgical mutilation of that child, there should be a law against that.

I think this cartoon gets it right for the societal question.  For this family, it seems like the root is the conflict between the parents.  It seems like the mother is trying to get back at the father and, unfortunately, is going to sacrifice and quite possibly kill her son to hurt his father.  I'm sure she'd somehow see it differently. 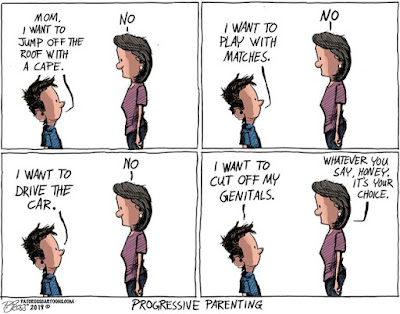 Hey, what do I know?  I fix radios, not people.  If one of the radios is really behaving oddly, I can redesign it or replace a lot of parts and rebuild it.