Speeding Up 3D Printing By Going to Planar Laser Light

In conventional 3D printers, the object is only being printed at one point.  In the case of the common plastic filament printers, the filament is run through a head the melts it to liquid plastic that's extruded out of the nozzle, and prints as a strand.  The head moves in X and Y directions (left/right and forward/backward), and when the layer is complete, the head rises a small distance in Z, (say half the diameter of the spot being extruded, .005"), and extrudes the plastic for another layer.  This continues, one layer at a time, to build up the parts.  Prints can take many hours, and overnight or 24 hour builds aren't uncommon, from what I read.  (No, I still haven't bought or built one).

The early incarnations of 3D printing worked by shining an intense laser at a point on the surface of a liquid resin.  The laser would convert the photosensitive resin into plastic while the resin not hit by the laser remained liquid.  This type of printer is still available and lately seems to have decreased in price more than the equivalent filament printers, although still typically a smaller print volume.  Again, the laser has to scan the entire layer, then the table would drop a tiny amount (say .002") into the liquid and the process repeated, building the part layer by layer.

The key similarity is that all that's getting printed is one spot at a time.  What if instead of printing one spot, one dimensional printing, the printer could sweep across the entire layer as a plane rather than a filament or a spot?  Bring the printing into two dimensions at once.  That could gather enormous improvements in speed!  It has been a holy grail of research for a while, and a team at Georgia Tech seems to be breaking barriers.  They're still working with very small parts but seeing prints coming out 1000 times faster than using a single laser spot.


Engineers at the Georgia Institute of Technology have developed a nanoscale 3D printing technique that fabricates small structures a thousand times faster than two-photon lithography (TPL) techniques, the conventional method of making nanoscale components. The new parallelized technique, known as femtosecond projection TPL (FP-TPL), can make parts with depth resolutions of 175 nanometers (6.89 millionths of an inch), which is better than established methods,  and can fabricate structures with 90-deg. overhangs that can’t currently be made.

The key difference is that instead of printing at one single spot of high-intensity laser light, typically around 700 to 800 nanometers in diameter, a million points of light are projected simultaneously in a plane.  This entire plane of projected light that can be patterned into arbitrary structures.  For example, look at this (magnified) image of a sample print of a micropillar forest still submerged in the photopolymer resist.  The inset is an electron microscope image of the micropillar array. 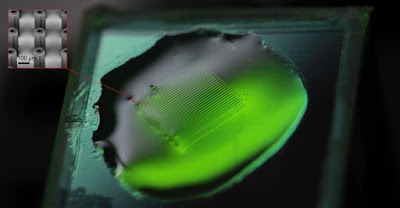 The printed array contains 900 micropillars over a 7 mm × 7 mm area (just over 1/8" on a side) and was printed in less than 90 minutes, as compared to more than a day of printing with serial techniques.


To create a million points, the researchers use a digital mask similar to those used in projectors to create images and videos. In this case, the mask controls a femtosecond laser that creates the desired light pattern in the precursor liquid polymer material. The high-intensity light causes a polymerization reaction that turns the liquid to solid, where desired, to create 3D structures.

Each layer of the fabricated structure is formed by a 35-femtosecond burst of high-intensity light. The projector and mask then create layer after layer until the entire structure is produced. Removing the liquid polymer leaves behind the part. The FP-TPL technique lets researchers turn out a structure in eight minutes that would take several hours using conventional processes.

35 femtoseconds is 35x10-15 second.  You may have bought RAM rated for 80 nanoseconds, which was considered fast static RAM in the day.  A femtosecond is 1 millionth of 1 nanosecond.  The speed of light in a vacuum is about 11.8 inches per nanosecond.  Which means in 35 femtoseconds, light goes about 400 millionths of an inch. 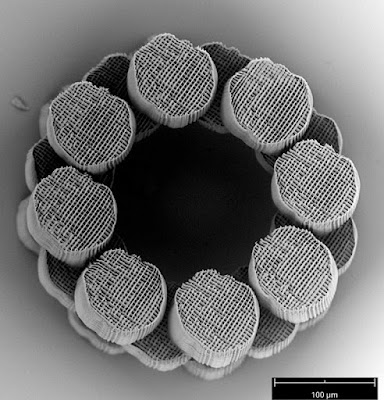 The article also emphasizes they are printing structures with this technique that have never been successfully printed before.   For instance, the technique can produce what the researchers call an “impossible bridge” with 90-deg. overhangs and more than a 1,000:1 aspect ratio of length to feature size.  “We can project the light to any depth we want in the material, so we can make suspended 3D structures” like that.


Researchers have printed suspended structures a millimeter long between bases that are smaller than 100 microns by 100 microns. ...

Beyond bridges, researchers also made a variety of structures that demonstrate the technique, including micro-pillars, cuboids, log-piles, wires, and spirals. The researchers used conventional polymer precursors, but Georgia Tech Assistant Professor Sourabh Saha believes the technique would also work for metals and ceramics that can be generated from precursor polymers.

An interesting highlight here is that groups have been working for years to accelerate the two-photon lithography process used to print nanoscale 3D structures.  Georgia Tech's advancement was to adopt a different way of focusing the light, using its time-domain properties, which allowed production of thin light sheets capable of high resolutions and tiny features.


Using a femtosecond laser let the team maintain enough light intensity to trigger two-photon polymerization while keeping point sizes thin. In the FP-TPL technique, femtosecond pulses are stretched and compressed as they pass through the optics to implement temporal focusing. The process, which generates 3D features smaller than the diffraction-limited focused light spot, requires that two photons hit the liquid precursor molecules simultaneously.

“Traditionally, there are tradeoffs between speed and resolution,” Saha says. “If you want a faster process, you lose resolution. We have broken this engineering tradeoff, letting us print a thousand times faster with the smallest of features.”

This is clearly a lab achievement at this point, but in the high tech world, lab curiosities move into production faster than in fields like medicine.  I don't know how long we're talking before they start getting commercialized, but thousandfold improvements in productivity are pretty hard to ignore.