After a Break to Change Some Design Details, Boeing Back at Work on SLS

Eric Berger at ArsTechnica has the story this week, that after about a month of inactivity on mating the main engines into the SLS booster, Boeing resumed work.


Nearly a month ago, NASA announced that Boeing had assembled the core stage structure that forms the backbone of its Space Launch System rocket. This meant that all technicians needed to do to complete the full core stage was bolt on four space shuttle main engines and connect their plumbing.

Completing the core stage at NASA's rocket factory, the Michoud Assembly Facility in Southern Louisiana, would represent a significant milestone for the program. However, after assembling the core stage structure in September, two sources familiar with Boeing's work at the factory said the company had to "stand down" operations due to some issues.

Within the last two weeks, the local paper was buzzing that the SLS pathfinder had arrived at the KSC by barge.  (It might surprise people who aren't familiar with this kind of hardware that it's regularly shipped here from another part of the country by barge.)  The pathfinder just underscores how far Boeing has to go before they're launching the SLS.  The pathfinder is just a full scale mockup of the SLS core stage to ensure all the hardware work among separate facilities is progressing as intended.  Things like crane lifting hardware working with the designed lifting points and that everything needed for the ground work to take place was anticipated and designed for.


It is not clear what triggered the need for a corrective action, but one source suggested to Ars that Boeing technicians are having difficulty attaching the large rocket engines in a horizontal configuration rather than a vertical position. NASA and Boeing made a late change to the final assembly process, deciding to mate pieces of the core stage horizontally rather than vertically to save time. However, this source said horizontal mating of the engines has created problems.

That said, they seem to have recovered and on Saturday Tracy McMahan, a spokesperson for Marshall Space Flight Center, said,  "NASA and Boeing are expected to have the first engine soft mated to the core stage next week."  McMahan went on to say, "however, there are many steps in engine installation that have to occur before the installation is complete."

Still to come, NASA and Boeing hope to have the core booster completed soon.  That will allow the rocket to be moved by barge from Louisiana to a large test stand at nearby Stennis Space Center in southern Mississippi.  There, at some point in 2020, the space agency plans to conduct a full-duration test firing known as a "Green Run" test to ensure the rocket is safe to launch.

The SLS program was nine years old last month, and its first flight was supposed to have been in 2016.  This core stage is expected to fly the Artemis 1 mission for NASA some time in 2021 - launch date not scheduled yet.  If you're counting, that's at least five years over schedule and so far about $20 billion dollars spent on it.  As I've pointed out several times, Alabama Senator Richard Shelby (R), whose state includes the Marshall Space Flight center where the SLS design is coordinated, has demanded that NASA use the SLS rocket to launch humans to the Moon, despite the availability of the Falcon Heavy, which costs significantly less and has already flown three times. 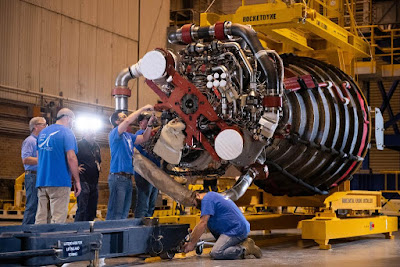 Workers prepare the forward (mounting) areas of one of the SLS core engines.  These are the old Space Shuttle Main Engines.