Very few commentators rise to the level of Victor Davis Hanson, Stanford University Professor, classicist and historian - simply known to fans and foes as VDH.  He puts out the premise that America is entering a Dark Age and gives some arguments to back his claim at PJ Media.  As always, I'll drop a few quotes here and encourage you to go read.

VDH opens with a perspective from his life as historian and classicist.  The Dark Age Greeks, he notes, realized they were surrounded by ruins of spectacular buildings they couldn't hope to duplicate.  Largely illiterate, they'd occasionally plow up a piece of fired clay with symbols on it they couldn't understand, and wondered what those meant.  Were they connected to those buildings?


We of the 21st century are beginning to look back at our own lost epic times and wonder about these now-nameless giants who left behind monuments that we cannot replicate, but instead merely use or even mock.

Does anyone believe that contemporary Americans could build another transcontinental railroad in six years?

Californians tried to build a high-speed rail line. But after more than a decade of government incompetence, lawsuits, cost overruns and constant bureaucratic squabbling, they have all but given up. The result is a half-built overpass over the skyline of Fresno -- and not yet a foot of track laid.
...
America went to the moon in 1969 with supposedly primitive computers and backward engineering. Does anyone believe we could launch a similar moonshot today? No American has set foot on the moon in the last 47 years, and it may not happen in the next 50 years.

Our writers, directors and actors have lost the skills of their ancestors. But they are also cowardly, and in regimented fashion they simply parrot boring race, class and gender bromides that are neither interesting nor funny. Does anyone believe that the Oscar ceremonies are more engaging and dignified than in the past?
...
As we walk amid the refuse, needles and excrement of the sidewalks of our fetid cities; as we sit motionless on our jammed ancient freeways; and as we pout on Twitter and electronically whine in the porticos of our Ivy League campuses, will we ask: "Who were these people who left these strange monuments that we use but can neither emulate nor understand?"

In comparison to us, they now seem like gods.

Anecdotally, we read reports like modern law school students being unable to understand writings from 1800s leaders, such as Fredrick Douglas.  We read about a widespread drop in IQ scores in the Western world and other stories showing a falling off in academic prowess over the last century.  These stories add to VDH's arguments.

Over the years, I've said (and more often hinted) that what I see in the future is not just the chance of an economic collapse due to the world's unsustainable debt levels.  I see a real chance for another Dark Ages.  The main driving force there is the Postmodernists in academia pushing the idea of "my truth and your truth"; the idea that there isn't anything other than our perceptions of things.  That works fine for simple questions like, "what's your favorite color?" but is completely wrong for "what's the speed of light?", "will this virus survive in air?" or any interactions with the real world.  VDH follows those trends to the conclusion a Dark Age may already be starting. 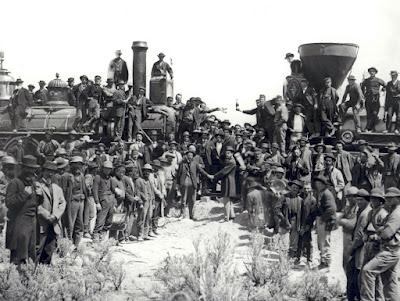 The completion of the transcontinental railroad at Promontory Summit, Utah, 1869.