Two items in the news caught my eye over the last few days.  The last scheduled flight of a Northrop Grumman Pegasus XL rocket, the only currently flying orbital-insertion vehicle dropped from an airplane, is currently scheduled for this Wednesday, Oct. 9.  The rocket, carried by its Lockheed L1011 delivery vehicle, arrived at the Cape Tuesday, Oct. 1.  Current weather forecasts for Wednesday aren't looking good to me, but I don't know exactly what sort of conditions those missions need.  The mission is to place NASA's ICON, the Ionospheric Connection Explorer satellite, into orbit.

According to Spaceflight Now, the original launch date was June of 2017:


ICON’s ride into space has been delayed more than two years by concerns related to its Pegasus rocket.

The mission was originally supposed to launch over the Pacific Ocean near Kwajalein Atoll, the home of a remote U.S. military test site in the Marshall Islands. Engineers wanted more time to inspect the Pegasus rocket motors after they were mishandled during shipment to Vandenberg. That pushed the launch back from June to December 2017, the next availability in the military-run range at Kwajalein. 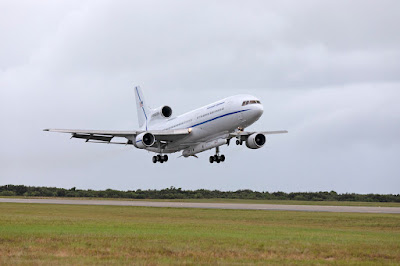 The launch or drop time is set for 9:30 PM on Wednesday night, which is 0130 UTC on October 10th.  This is the last-known mission on the Pegasus manifest, and it could well be the last flight a Pegasus rocket will ever make.


SpaceX transported the next Crew Dragon to the Cape last week as well.  This is the capsule that's destined for their in-flight abort test later this year.


The in-flight abort test will verify the Crew Dragon’s SuperDraco thrusters are capable of pushing the spacecraft away from a Falcon 9 rocket after liftoff. The safety system would allow astronauts to escape a catastrophic launch failure.

This represents a shuffling of several different Crew Dragon capsules originally set for different missions before the on-pad explosion of the first Crew Dragon scrambled their plans.  Now that the investigation has been completed and they're cleared to work again, the remaining Crew Dragon capsules are being shuffled in their missions to ensure one is available for all the scheduled missions.


The in-flight abort test plan calls for the rocket to take off from launch pad 39A at the Kennedy Space Center and arc over the Atlantic Ocean, firing its nine main engines more than a minute, as it would during a typical launch. SpaceX will pre-program the Falcon 9’s nine Merlin booster engines to switch off after surpassing the speed of sound, according to an environmental assessment for the test flight released by the Federal Aviation Administration.

A computer on the Crew Dragon spacecraft will detect the loss of thrust and trigger an abort between 83 and 100 seconds after liftoff. The SuperDraco escape engines will ignite almost instantaneously to push the craft away from the Falcon 9 launcher at an altitude between 48,000 feet and 91,000 feet (14.6 to 27.8 kilometers), officials wrote in the FAA environmental assessment.

SpaceX is not planning to recover this booster.  They will allow the first and second stages to break-up as they monitor, while the Crew Dragon will deploy parachutes to splash down in the Atlantic, where teams will recover the capsule.

The article includes this as the only hint about the schedule:


A regulatory filing with the Federal Communications Commission last month suggested the in-flight abort test was scheduled for no earlier than November. 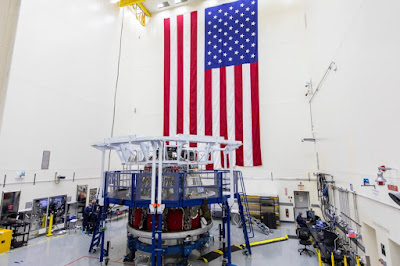 The Crew Dragon with a scaffolding in place around the top for the workers to get access.  SpaceX photo.