Riders and Mamils and Omils, Oh My!

Since the last few posts have been serious, and it's the weekend, I figure I'll be less serious and bring y'all up to date on something else around here.

Are you puzzling over the title?  Besides it being an homage to "Lions and Tigers and Bears" from the Wizard of Oz?

In my right sidebar's About Me box, it has included the term "roadie cyclist" for as long as I can recall.  Cycling used to be one of the main activities Mrs. Graybeard and I engaged in; our main exercise/outdoor hobby.  Twenty years ago, a fun Saturday might be to ride up to and through the Kennedy Space Center and back, a ride of about 80 miles round trip from home.  Which is how we'd ride it; we'd leave home in the morning and get home in the late afternoon.  In the last 10 years, since I started the blog, we'd ridden less often, less distance, and eventually stopped riding altogether.  I'm not sure when we stopped but I made a reference to riding in late 2010 and some other posts into late 2011 make me think we were riding then.

The point being that I had not been living up to that term for quite while.

Back in August of '18, a random neuron fired in my brain saying, "you really ought to get back to riding again."  I ignored it.  A couple of weeks later it started up again.  We'd never gotten rid of our bikes and gear, just pushed everything into convenient corners.  I started looking at my "indoor bike", a bike far too good to be relegated to riding on an indoor magnetic resistance trainer.  Pumped up the tires, brushed off the spiderwebs and dust.  By the end of August, I took my first indoor ride on the trainer.  I don't think it was 15 minutes long.

It was also August in Crematoria, where being outside carries the risk of spontaneous combustion, so I rode indoors until I could comfortably do 30 or 40 minute rides on the Magneto trainer (I'd do a link but the model I have is also over 10 years old and not on the websites anymore).  By the start of October I was ready to ride outdoors.  By the middle of October, I rode my bike on what used to be our several-nights-every-week ride, out to a lake west of town.  It's a 13 mile round trip using the backroads I take.  I took this picture January 7th of this year.  You can tell it's January - I still have ice in my water bottle. 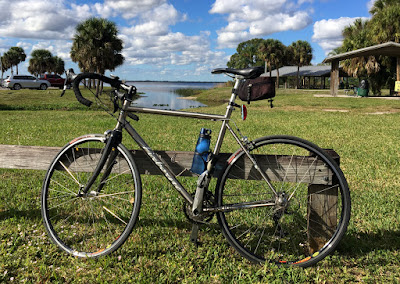 All cyclists like to tell you about their bikes.  This is a titanium bike from a company called Airborne (as you can see).  Airborne built very nice bikes and had built some touring bikes for a company that takes tourists on bike tours - referred to as supported touring.  They'd take people across Vermont, for example, and go from town to town, carrying the customers clothes, overnight bags and more, so that they didn't need to hang that stuff from their bikes.  For some reason, Airborne had a few leftovers and put these up on eBay.  I got it for well under a k-buck, while finished titanium bikes like this were easily $2500.  It was setup as touring bike but with odd components and very lightweight wheels.  Within the year I rebuilt it as a comfortable road bike, changed the handlebar from straight to drop style, changed shifters, wheels, tires, and the rear gear cluster, so a rather complete rebuild.  I think with all the parts I bought for the rebuild, it still came in under $1000.

So what's all this Mamils and Omils stuff?  I ran into the term MAMIL in 2010 and used it in a blog post (which is one way I know I was riding in '10).  As you can see, MAMIL is an acronym for Middle-Aged Men in Lycra.  The only problem is that since I'm 65, I can't claim to be middle-aged, so I changed that into Old Men in Lycra.  By Riders, I'm referring to being too young to claim even Mamil-hood.  I was there once, but I don't remember it.

These days I ride three days a week, by myself.  Retiree privilege allows me to ride at 9 or 10AM on weekdays when traffic along my route is essentially nonexistent.  My rides over the year have ranged from 10 to 20 miles; no full days riding anymore.

I have many friends who simply can't do this.  I have one friend waiting on knee replacements who can hardly walk.  Others that get around but have various conditions that impact their health in serious ways.  I know that my riding doesn't do a thing for them but I feel that since I can do this it would be wrong not to.  Every time I throw a leg over the bike and leave the house, I feel blessed to be able to do it.