We first met Rocket Lab of New Zealand in these pages in late 2017.  The rest of 2017 didn't go as planned and the company didn't succeed in launching the second test flight of their Electron booster that year, but did so by mid-January of 2018.

Things have been going well for the company, now billed as a US-New Zealand company.  They've signed a contract to do some launches from Wallops Island, Virginia, and their launch business is picking up.

Seven satellites is an impressive number, considering that the previous data implied the vehicle could lift about 220 lbs into low earth orbit.   By their descriptions, it appears that the satellites were actually that small.


In addition to Global-3, the payloads included two Prometheus satellites, built by Los Alamos National Laboratory for the U.S. Special Operations Command. The demonstration satellites are about the size of a loaf of bread and are designed to transfer data in a store-and-forward mode as they circle the planet.

Two of Swarm Technologies’ SpaceBEE communication satellites were also on board. Swarm got into trouble last year for deploying cracker-sized satellites in orbit without the required go-ahead from the Federal Communications Commission, but these satellites posed no such problem.

The sixth satellite is ACRUX-1, an experimental spacecraft built by students in Australia’s Melbourne Space Program. The identity of the seventh satellite has not been disclosed.

Earlier in the year, in April, Rocket Lab CEO Peter Beck expressed some concern that the small launcher business is heading for a painful consolidation process.  In the wake of a successful launch for the US Defense Advanced Research Projects Administration (DARPA), his company was in a very enviable position.


This mission means that Rocket Lab has arrived as the first fully commercial player for private satellite, civil space, and defense launches in the small-satellite industry. This is the hottest area of the "new space" race, with dozens of companies large and small in the United States, China, and around the world seeking to develop new rockets to serve the market of satellites weighing from a few kilograms up to about one or two tons. By some counts, there are now as many as 117 such efforts at varying degrees of advancement.

It is not clear how many of these efforts will survive, but there are probably a few "lanes" for these companies to fill. There is low-cost micro-launch, with rockets providing perhaps up to 50 or 100kg to low-Earth orbit; there is small launch, from 100kg to several hundred kilograms (this is where Rocket Lab's Electron booster falls, with a capacity of 150kg); and then there are a bit bigger vehicles in the 800kg to 2-ton capacity range.

Most likely one, or at most two, US-based companies will survive in each lane, with additional internationals. For example, China's government will likely support at least a couple of small-satellite launch companies as it seeks to match the US government's capability for rapid deployment of space-based assets.

Beck now has somewhat of a novel vantage point because he has been through the wringer. Rocket Lab started earlier than most of the companies aspiring to launch small satellites, and it's been a long road.  Founded in 2006, the company spent 11 years getting to its first flight in 2017, and that was just the beginning of the struggle, he said.  After their January '18 launch, they had achieved orbit a few times and believed they had a rocket that would work.  They literally stopped what they were doing to learn how to be a launch services company and remake themselves in that mold.


Beck still envisions a vibrant economy for the small-satellite launch industry, but he rolls his eyes when he sees pitches from some competitors to investors that include numbers like a trillion-dollar market, which assumes every possible constellation will launch its maximum number of satellites.

"The numbers seem to get bigger and bigger," he said. "We're a pretty conservative bunch, and when you take that kind of approach to satellites, you end up at a point where there are really only enough for one or two small launch vehicles. I just don’t see hundreds of launches available for many, many companies. I'd expect some pretty decent consolidation over the next year to 18 months,"

From where I sit, I have to agree with Beck.  It's hard to see how there could be a small satellite industry that could be self-sustaining for the long term.  How long until it's too crowded to put small satellites in Low Earth Orbits?  I don't see the point in speculating which competitors will be most likely to vie with Rocket Lab, but Vector, Firefly, and Virgin Orbit have all talked about flying their rockets to space this year.  For his part, Beck says,


"If they're making a big song-and-dance about engine tests, you know they’re miles away," he said. Even full stage tests, he says, is an indication that they're a long way away. There's just so much work—and after reaching orbit, he would argue, the hard work of transformation has just begun. 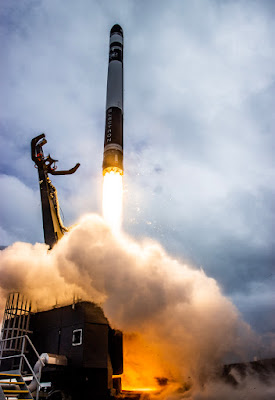 Rocket Lab's Electron booster on the Darpa R3D2 mission, March 28, 2019.  Much like the SpaceX Falcon 9 flies on 9 Merlin engines (where the 9 in the name originates), the Electron flies on 9 Rutherford engines, substantially 3D printed.