On This Afternoon 50 Years Ago

At 17:21:50 Universal Time (or Greenwich Mean Time as it was more often called in 1969) the Service Module's 20,500-pound-thrust engine started firing to slow Apollo 11's velocity enough to go into lunar orbit.  In Eastern Daylight Time that's 1:21:50 PM.  The burn lasted just under six minutes (5:57).  The burn placed the the three modules into an elliptical-lunar orbit of 69 by 190 miles.  That was made more circular by a second, much shorter burn of 17 seconds.  This placed the docked vehicles into a lunar orbit of 62 by 70.5 miles.

The burn necessarily took place with the spacecraft on the far side of the moon, so ground controllers - and the millions of us hanging on every word - didn't know if the burn was successful until the spacecraft came over the horizon and could re-establish radio contact with Earth.  Not that they or we could have done anything for the crew if there was constant communications.  It's a quarter million miles away; nobody could have done a thing for them.

An artist's concept from the Apollo days: 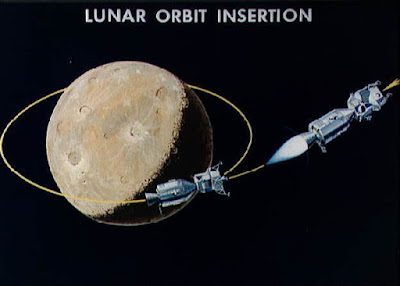 It's just over 24 hours until the landing.  The crew is busy scouting their landing site, checking out the Lunar Module and preparing for tomorrow as they orbit the moon every two hours.  They do a couple of video transmissions for those keeping track of the mission.