The results of the Double Smoke Sous Vee Barbecue experiment were fantastic. The bark was better than the single smoke after sous vide approach. It pulled very easily. Moist, delicious. All in all the process took from about 11AM Wednesday through to 5PM Thursday, so there’s the aspect of planning, and doing things on schedule, but with the exception of needing two consecutive days outside with no rain, that’s not particularly hard.

Right out of the smoker: 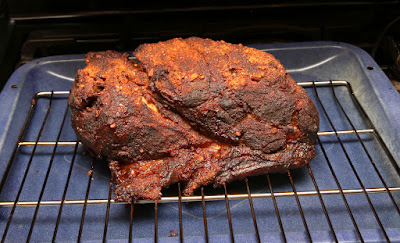 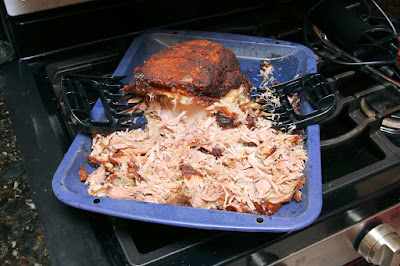 I had my doubts this would be worth it yesterday morning after the sous vide bath. It went into the bath (double bagged) Wednesday night around 5PM, and when it went in, the Internal Temp was 145 (F).  After 18 hours at 165, at 11 AM on the 4th, the roast had given off a lot of juices, and I assumed it washed away the bark that had started. It’s tricky to handle food at this stage because it’s fully cooked and fall-off-the-bone tender. It was trying to fall apart right then and there, but I gave it a rub with yellow mustard and then the same spice rub I used before the first smoking. When I put it in the smoker, the meat was trying to slide off the generous fat pad that the pork had. I think next time I’ll tie it up with butcher twine.

It was into the smoker by just before noon for the second smoke and by 3 PM I could see it was getting a good looking bark.

At this time yesterday, I would have said this will be my standard way of doing pulled pork from now on.  I don’t know if the bark that started in the first smoke really did get washed away, and I put it back in the second smoke, or if it mostly survived and I added to it.  I just know it’s better than my single smoked version with sv first and then a few hours in the smoker.

Today I got started thinking of it differently.  It was in the smoker a total of about 9 hours: four on the first day and five on the second.  Was the bark better simply because it had 9 hours of time in the smoker or because of the special treatment?  When I used to do the smoking from a raw piece of pork, it would be in the smoker 12 hours or more.  Once, I think it went close to 15 hours.  Maybe it's just the total time in the conditions found inside the smoker that matters.  For comparison again, compare this butt, ready to pull, that I did back in 2013.  Notice how much darker it is than the most recent one? 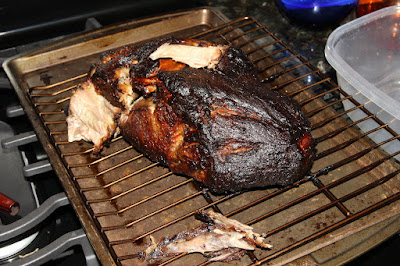 More research - more barbecue - is definitely called for.  Mustn't rush into these sorts of decisions.