This week, a week when Democrats and Republicans united to ignore that pesky ol' budget ceiling and continue to spend us into oblivion, I read a distinctly different story.

Do you recall the name of Dr. Judy Shelton?  Back during the earliest days of the transition team, and even months before his election, Dr. Shelton was one of Trump's team of economic advisors.  As far as I know (from public records and articles) she was the sole advocate of sound money.  Dr. Shelton advocated we provide something like the Treasury Inflation Protected Security (TIPS) bonds which would be redeemable in either dollars or gold, effectively tying the two together without a formal gold standard.  A video of her describing this is here.  Note the date on that video is 2012.

Last week Trump nominated Dr. Shelton to the Federal Reserve Board.  Of course, the liberal media is aghast.


That triggered a flurry of superficial and derisive references in the controlled media to Shelton’s past support of a gold standard.

For example, CBS News described her as “a believer in the return to the gold standard, a money policy abandoned by the U.S. in 1971.” According to the story, “mainstream economists believe it's a fringe view.”

As the “mainstream” media portrays sound money advocates, we apparently are nostalgic for the monetary system that existed all the way up until 1971.


As President Donald Trump named his picks to fill two influential seats on the Federal Reserve's Board of Governors, the price of gold surged. That may be because one of the them, Judy Shelton, is a believer in the return to the gold standard, a money policy abandoned by the U.S. in 1971.

They repeat the phrase that "mainstream economists" disagree several times, but never give any numbers or figures to back their argument.  Just the old saw that "the US Economy is too complex to tie it to a gold standard".  (I think what they're really saying is the US Economy is too fucked up to link to a standard.)  Those mainstream economists didn't see the 2008 collapse coming, but they'll see the next one, by golly!  Half a dozen (or more) sound money economists I was reading predicted 2008 a couple of years in advance.

Article 1 section 10 of the US Constitution says:


No State shall enter into any Treaty, Alliance, or Confederation; grant Letters of Marque and Reprisal; coin Money; emit Bills of Credit; make any Thing but gold and silver Coin a Tender in Payment of Debts; pass any Bill of Attainder, ex post facto Law, or Law impairing the Obligation of Contracts, or grant any Title of Nobility.  [Bold added: SiG]

and, of course, the Federal Government violates that by the bushel every second.   Sound money can be, as the document says, gold or silver or a mix of the two, and although the constitution doesn't say it, other commodities that can't be printed in practically infinite amounts could do.


The Coinage Act of 1792 defined a dollar in terms of silver. Specifically, a dollar was to be 371.25 grains (equivalent to about three-fourths of an ounce) of silver, in harmony with the Spanish milled dollar.

Even before the creation of the Federal Reserve in 1913, certain banking and political interests had worked to de-monetize silver.

In 1873, Congress moved to sideline the silver dollar. That sparked the so-called Free Silver Movement, which stood for allowing the supply of silver coins to be increased in accord with demand.

But, hey, that's old-fashioned stuff.  Now we have Modern Monetary Theory, which says the government can no more run out of money than a football game can run out of points.  Want more than all the money in the world?  We just have to run the computers a little longer to add all those zeroes.

Good luck, Dr. Shelton.  I sure hope your nomination goes through.  More importantly, I hope your ideas get listened to. 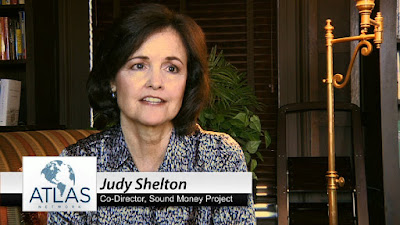