I'm Starting to Have a Bad Feeling About This

I'm starting to have a bad feeling about the Trump administration, that is.

What started out as "drain the swamp" is looking more and more like a crew of alligators.  I see more political veterans than political outsiders.

Yesterday, Trump chose Steve Mnuchin, a Goldman guy, as his Treasury secretary.  He will be the third U.S. Treasury secretary from Goldman, following Robert Rubin and Henry Paulson. But Mnuchin is probably more Goldman than any of them. His father worked there. So did his brother.  Mnuchin is as close to pure blood Goldman Sachs as you get.

Can he even see the problems in our monetary system?  Can he even see that there's something fundamentally wrong with leaving interest rates unnaturally low, so perversely low that the lack of interest on savings is hurting people, or is he so tightly bound to the Goldman world that it's normal and natural for he and his friends to take free money and make profits while ordinary Americans suffer?

Can he see that decoupling the dollar from gold and turning it into a debt instrument is the root cause of so many of our problems; not the least of which is the 40 year stagnation of American wages?

It's not that long ago, just the end of August, when the media was all pearl clutching because a Trump advisor, Dr. Judy Shelton, had implied a return to a gold standard has merit.  She advocated for issuing bonds that are convertible to gold.  We had hopes this sort of view might spread in the Trump administration.

Instead, it looks like we're getting someone as far from that viewpoint as, well, as the Fed.gov ruling class are now.  You might want to go long on defense stocks or on real estate in the DC corridor.  It might be a good time to open a bar outside Alexandria, say, or some other sort of service business in the beltway area. 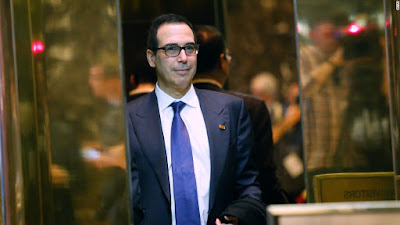 Although I'm obviously a little bummed by the apparent conventionality of this appointment, but I'll give the guy some slack to see what he wants to do.  Maybe he's been disgruntled with the failed monetary and fiscal policy all these years and really isn't that bad himself.