Things They Are A-Changin'

With apologies to Bob Dylan.  ("For the times they are a-changin’")

I spent an hour or so watching videos on how to start taking my G0704 apart today, and then plunged in.  After a little while, the table was off and the base ready for work to start. 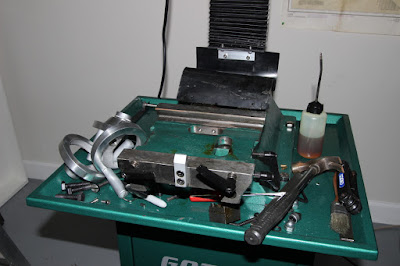 The main X/Y table is removed.  The table itself, which aligns with the X-axis, is standing to the left just outside this frame, what you see in the top center is the cross slide which actually holds both the X and Y axes' ballscrews and mounts.  The table slides left/right across its top.  The mod for the X-axis calls for it to have a bit of relief cut into it, as shown in this picture (this picture is rotated about 90 degrees clockwise). 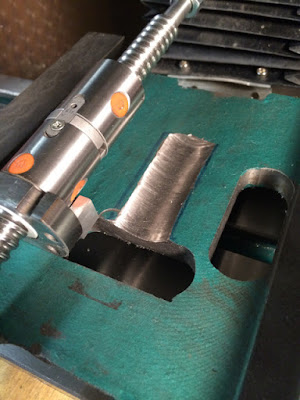 That relieved area doesn't have to match the radius of the ballnuts, it just has to allow some clearance for the ballscrew when it's in the right position, which gets set when everything is reassembled.  Hoss made his flat bottomed because he had another big milling machine available.  The Y-axis ballnut mount goes in that elongated slot on the right.  It will come up from the bottom in this view, and X-axis will go on the top side as seen. There's also a lot of machining to add the oil injection system that I need to start working on.  It looks like the biggest task is to cut some channels on the surface of the cross slide that holds the table for the oil to flow between them. 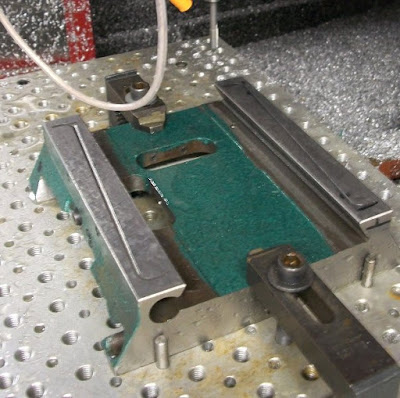 So my first task is to do some cutting of this heavy, cast iron piece on my Sherline micro mill.  This will be a test for us both.