It's time to do my more-or-less weekly update to the shop mods I've been doing.  I'm surprised to see it's two weeks since my last real update, I mean with pictures of what I've been working on and all.

Most of this week has been taken up with shuffling computers around.  That always seems to take much more time than I think it would.  I spent a lot of Friday and Saturday trying to convince the Linux installer software to not commandeer the entire drive on the shop computer, but to leave me a partition for Windows 7, just in case.  The Linux distribution that comes with LinuxCNC is from Debian and it's called Wheezy.  This isn't exactly what Debian distributed as Wheezy, which was replaced about 18 months ago (in the same sense Windows 8 replaced 7 and 10 replaced 8).  Driving the parallel port properly is no simple trick and requires a separate low level hardware control called the RTAI kernel, so this Wheezy contains the RTAI kernel.  Confused yet?

After several unsuccessful attempts to be sure Wheezy was going to allow me to keep the Windows partition, I declared defeat.  While Wheezy wasn't cooperative, I know that I've done this with Ubuntu several times, and I found a possible way to do this with an old version of Ubuntu called Precise.  Getting Precise to install dual boot was easy, and within a half hour I was back trying to get LinuxCNC installed.  I thought I could get it to support the RTAI kernel so it could run LinuxCNC but it kept telling me I couldn't do what I wanted.  Trips to the LinuxCNC Wiki and forums were fruitless.  After a few hours of that, I declared defeat and thought I'd try to get Wheezy to install itself over Precise.  When I did that, it promptly commandeered the entire hard drive for itself, destroying not only my bare installation of Ubuntu, but the Windows 7 OS I wanted to keep "just in case".

I know of no way to recover that, so I said "Uncle", and committed to getting LinuxCNC running.  That was Saturday night.  Since then, I got the system to run my Sherline/A2ZCNC mill properly, and today got backlash compensation set properly on all four axes. Four axes may surprise some of you, so I grabbed a photo of the rotary or A axis. 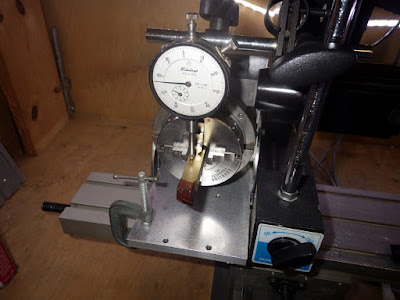 I came up with this way of checking backlash and it seemed to work, although I'd like a better way.  The square lathe cutting bit is held in a four jaw chuck and the rotary table initially set to zero degrees.  The magnetic holder for the indicator isn't doing anything (the table is aluminum), so I can slide the indicator across the half inch wide bit and ensure it doesn't move (it did at first, and I tweaked the angle until the bit was level and the indicator not moving - I made that my new zero).  Then I rotate to 90 degrees, which brings up another square face which should be level, and it is.  Finally, I go back to zero and make sure it's level, which it is.  Backlash would show up as 0 degrees not being level when I go from 90 back to 0.  A wider bit would be more sensitive, but I didn't have one lying around.

None of this is a big deal, but my mill is usable again and I expect to be using it as I go forward with the work on the Grizzly conversion.  I spent entirely too much time with trying to install the system the way I wanted, though.  It would have been far easier to buy a second drive and keep Windows on that.  Instead, I just have my installation CD.