The surplus box I bought to house the motor controllers for my CNC conversion had a black sheet metal cover that was essentially identical to the black sheet metal bottom it has.  Early in the planning process for the box, Mrs. Graybeard found an old sheet of plexiglass that has been in a corner for a long time, like maybe since the early 80s.  She thought it would be a good top for the box, since there are diagnostic LEDs in the box and a see-through cover would make it easy to check those lights if something starts going wrong.  I've got to say I don't see many see-through box covers in industry, but that doesn't mean it's a bad idea.  Made sense to me.

The plexiglass was orange.  A bit unusual, but I can't say I'm concerned.  More people will see this here than will ever see it in person.  The sharp eyed will note the heads of the screws in the cover are blue.  These were left over from my powder coating adventures.  No particular other reason other than using some junked parts. 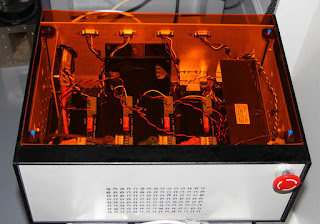 If you want a closer look, here's a 30 second video moving the camera around while it's running.  You can see the green and red LEDs quite clearly.

Posted by SiGraybeard at 6:08 PM