So Springfield Armory Has an AR-15 Now...

Does that make everyone except Glock and Taurus?

I think anyone who follows gun blogs and news has seen the hype over the "SAINT" that started a month or 6 weeks ago, complete with vague statements ("defend your legacy") and a mandatorily diverse group of hot and sweaty models.  I guess I haven't talked about it much since the CNC project started taking over my life, but I'm a bit of a Springfield Armory fanboy.  I have three SA handguns, an original XDm, a subcompact XD and a compact XDm.  I love them all.  With any one of them, I feel like I can pick it up and hit the target, even with months off.  Given my background, then, you might figure I was interested in seeing what the hype was about.

Meh.  I mean, it looks like a nice enough AR-15, but it's an AR-15 in a world where they're pretty much potato chips.  A commodity product.  Mrs. Graybeard and I each have our own AR and I have the 80% receivers to build more. 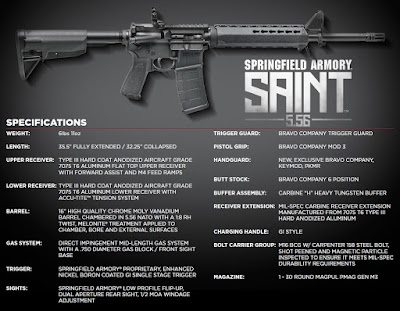 To be honest, I was expecting a handgun, perhaps a successor to the XDs, which seems to be an extremely successful product.  Maybe a version of the only handgun currently on my wish list with a stainless slide, like they do for so many others in that product line.  Or maybe something that goes head to head with Ruger Precision Rifle, which I still must confess some irrational lust for.  Or maybe their M1A line in something other than .308 (not that there's anything wrong with that).