One Step Forward, Two Steps Back

After last Sunday's post, I spent some time considering how to drill the 4" long hole and finally bought a special drill bit.  Not content to go with a simple, cheapo drill bit with a long flute length, I went and researched the proper angle for the cutting point on the bit, found that "bigger numbers are better", and then found an exotic, 6" long, cobalt steel bit with a 135 degree angle.  I had to order that because it's not a big box store kind of bit.  Standard drill bits tend to have 118 degree angles, which is a good compromise, but I figured I wanted every possible advantage I could get.

Still, how do you drill a 4" long, 1/8" diameter hole without snapping the drill bit, or having it wander into the next county?  I think a proper fixture and then doing my best to not exert any sideways forces onto the bit are the ticket.  No handheld drill; use the Grizzly mill, taken apart as it is, as a drill press.  Like this: 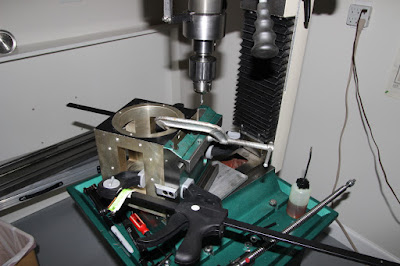 The cross slide is clamped to a fixture that holds it at 90 degrees to vertical.  Use a center drill to spot a hole where the 1/8" hole goes.  Perhaps (I'm not decided) drill a preliminary hole with a smaller bit, like 1/16".  Then drill the long hole without moving anything except the mill's head stock.

The fixture is a piece of scrap aluminum Mrs. Graybeard gifted me back in '04 or so, when I first started metalworking as a hobby.  It's actually a waveguide switch and probably a military or space program surplus switch at that since it's (get this, cognoscenti) an S-band waveguide switch.  It's built the way you'd expect Milspec hardware to be built: seems to have redundant switches in it to let "the system" know if it switched or not; all of the hardware is stainless on aluminum, and it's just built like a tank.  I'm sure the angles on this are going to be pretty close to the accuracy I'd get from an angle plate because the dimensional accuracy required out of a waveguide system is pretty high.

With that step forward finished, I thought it was time to cut the oil grooves.  I drew a set of curves I'd like the groove to look like and wrote a CNC file to cut the grooves on my Sherline-based system, then moved the cross slide over to the table on it.  While setting up the cross slide to be worked on, I noticed that the X-axis had changed from the place I initially set it.  Having that happen while working on the cross slide would be disastrous, so I started double checking to make sure I could see what was going on.  Sure enough, I found that my X-axis was losing motion.  The motor kept turning and seemed normal, but the leadscrew would stop turning.  At one point, I wrote a little "torture test" file that just moved the table back and forth 8 inches.  After about half an hour, the left end of the motion had drifted right half an inch.  That would have made a mess out of the oiling grooves.

Then the troubleshooting began.  I don't want to get into too much detail here, but Sherline uses a funky system in their motor mounts.  Still, it may be odd, but the Y and Z axes use the same system and are both fine.  The leadscrew for the X-axis ends in a small (half inch long?) portion that's threaded 1/4-20 and ends in a small, conical taper that engages the matching taper on a coupler that couples the motor to the leadscrew.   The coupler is attached to the lead screw with a 5-40 screw down the axis of the leadscrew, and a 1/4-20 nut pulls the coupler tight against ball bearings on one side and pulls itself tight against the ball bearings on the other side. 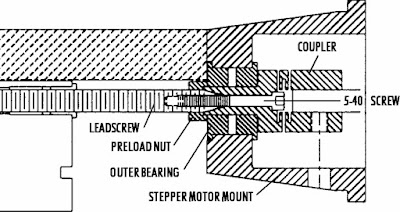 When I first started troubleshooting this problem, I could stick a hex key into that hole on the bottom near the right end (in this picture) to immobilize the coupler, but keep turning the lead screw (and moving the table) by turning another hex key in the 5-40 screw.   The two systems that are supposed to snug everything together were working separately.

Both the 5-40 and 1/4-20 screw threads looked a little damaged.   I ran a die over the 1/4-20 threads on the leadscrew and returned them to normal-looking threads.  Both the preload nut and one out of my hardware box ran much better on the leadscrew 1/4-20 threads.  The small screw, #5-40, is an odd size and while I had some spares, putting one into the end of the leadscrew made the new one look as damaged as the old one.  I bought a tap to clean up those threads, too.  Along with several pieces of spare hardware.

Meanwhile, I'm waiting for the parts I ordered and working on other things that need to get done.